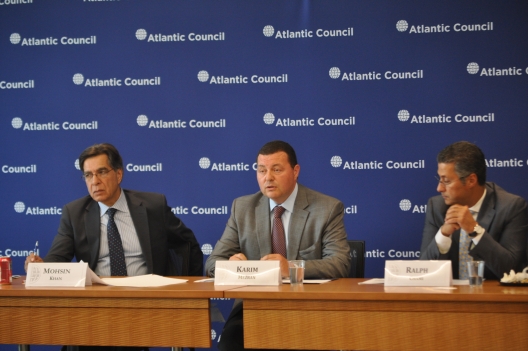 Most headlines out of Libya today are about the political and security crises gripping the country, and little has been said about the state of the economy beyond a recent spate of oil export disruptions.

Hariri Center Senior Fellows Mohsin Khan and Karim Mezran recently authored an issue brief evaluating Libya’s underlying structural economic problems and offering short, medium, and long-term recommendations to address the economic challenges amid political and security instability. The report, “The Libyan Economy after the Revolution: Still No Clear Vision,” was launched at a roundtable event on Tuesday, August 27, 2013 under the auspices of the Libya Working Group where Khan and Mezran presented their findings and analysis to a group of nearly fifty participants including US government personnel, scholars, and private sector representatives. Ralph Chami, division chief and Libya mission chief at the International Monetary Fund, provided commentary.

To date, Libya’s elected transitional government has not yet formulated an economic plan, merely paying lip service to economic policies as it grapples with overcoming its political paralysis. With the public sector’s bloated and underworked bureaucracies employing eighty-five percent of the workforce and the country’s dependency on oil revenues, transforming Libya into a market-oriented economy will require changes in labor laws, investment in vocational training, and more. Meanwhile, in an effort to restore the public’s confidence in its ability to lead, the Libyan government has recently announced a national dialogue initiative intended to bring together all cross-sections of society to work toward a common national vision. Meanwhile, the International Monetary Fund, aware of the serious risks Libya faces, continues to urge the government to implement prudent economic policies and has been pushing with moving forward on subsidy reforms.

The audience engaged the panelists on an array of economic and political issues, such as subsidy reform, diversification of hydrocarbons, employment opportunities, prospects for the national dialogue in advancing the economic agenda, and engagement with the private sector. The panel concluded that it is likely the transitional government will continue to transfer resources by adopting a mix economic model of populist measures and limited reforms, but it must to grow the economy sooner rather than later.