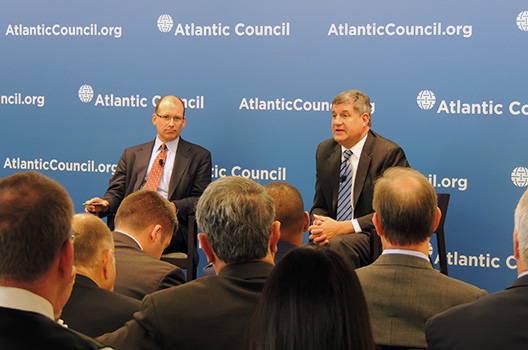 What is the future of American Air Force acquisition? In the face of increasingly austere fiscal environments, how will the US continue to acquire cutting edge technology and maintain decisiveness on the battlefield? Dr. William LaPlante, Assistant Secretary of the Air Force for Acquisition, gave an address entitled “The Role of Industry in Air Force Acquisition” as part of the Atlantic Council Defense-Industrial Policy series on June 13, 2014 to answer these difficult questions.

Dr. LaPlante highlighted the role private-public dialogue should play in deciding the future of air force acquisition, saying “transparency is talking and also collaborating with industry.” He further indicated the need for industry-government collaboration in order to pursue easily achievable objectives that would enable each to navigate future fiscal realities. In stressing the need to evaluate and improve the process of air force acquisition, LaPlante advocated for strategies that “focus on tasks that have measurable outcomes.” Statistical lessons, according to LaPlante, offer some guidance in approaching the difficulties exacerbated by the current fiscal climate. “Don’t assume the adversary is not as smart as we are, both in engineering and in tactics” stated LaPlante as he emphasized the need to improve defense procurement processes.

Major General Arnold Punaro, chairman of the National Defense Industrial Association (NDIA) board, gave the opening remarks discussing his time in government spent evaluating defense procurement systems. Punaro endorsed LaPlante’s decisive leadership of the Air Force acquisition portfolio and praised his commitment to private-public dialogue. General Punaro also expressed his excitement for the NDIA/Atlantic Council Defense-Industrial Policy series.
This event was part of the Atlantic Council Defense-Industrial Policy series which is a platform from which senior public officials can address defense-capabilities and the public policies that shape them and the markets they serve. The series is a joint initiative of the Atlantic Council and the National Defense Industrial Association to engage the perspective of government leaders on issues at the interface of government and industry.