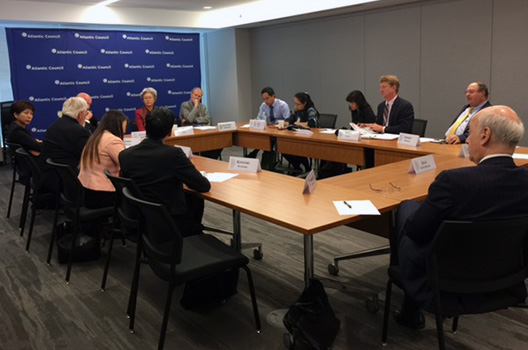 On May 21, Atlantic Council’s Asia Security Initiative in the Brent Scowcroft Center on International Security hosted an off-the-record discussion on “The Security and Economic Issues on the China-US Bilateral Agenda.” The roundtable featured Fu Ying, the Chairperson of the Foreign Affairs Committee of the National People’s Congress of the People’s Republic of China. The event was moderated by Mathew Burrows, Director of the Strategic Foresight Initiative in the Scowcroft Center.

The United States and China are experiencing problems at a critical and interesting time, and the miscommunications between the two countries have never been as severe as current events prove.

The discussion focused around a few central questions: Is China America’s friend or enemy? Or do the powers have less of a Manichean relationship? How do we improve the relationship and avoid future mistakes? The two countries do not take the time to truly understand each other and thus increase the chances of a mutual catastrophe.

Indeed, the South China Sea disputes, the anti-Western campaign in China such as banning Western textbooks, and the supposed competition for leadership in the world, among others issues, have resulted in heightened tension between the two powers. Instead of fixating on an irresolvable dichotomy of right and wrong, it was suggested that the two states work to see the bigger picture, go back to earlier agreements, and promote better communication not between the governments, but also between the societies.