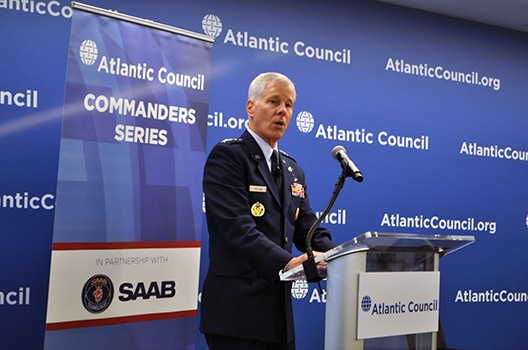 How should US space programs adjust to sequestration? How does the US regain the lead in liquid propulsion rockets? What can the US do to inspire young people to get involved in space?

Those were just some of the topics which General William L. Shelton, commander of US Air Force Space Command, discussed at the Atlantic Council’s Commanders Series event, titled “The US Future in Space,” sponsored by Saab North America on July 22, 2014.

There is a “new normal” in space, defined by a challenging space environment, a decreased budgetary outlook, and the potential for interruption in RD-180 rocket supply from Russia. The increasingly congested and contested space domain presents urgent challenges for the United States.

In the face of an increasingly austere fiscal environment, improving flexibility while decreasing complexity, according to Shelton, operates as an important means of reducing costs. In proposing a way to both decrease launch costs and complexity while increasing resiliency, Shelton proposed the possible separation of strategic and communication packages within satellites. In other words, increased flexibility leads to decreased complexity. Furthermore, Shelton stressed the need to find the middle ground between acquired capabilities, resilience, and affordability in order to maintain the American position in space.

A lack of interest is jeopardizing US dominance in the space domain. “We need to get some young folks excited about building rockets,” he said, in reference to ways in which the United States can regain the lead in liquid propulsion rockets, an area Shelton said in which we’ve fallen behind. “Space has become a utility, you plug it in and take it for granted” lamented Shelton as he likened the public services provided by space to outlets in our living rooms. In reference to why this might be, Shelton stated “I don’t see that big pursuit that captures the imagination of young people everywhere.”

The discussion with Gen. Shelton was hosted as part of the Commanders Series, which is sponsored by SAAB America Inc. and is the preeminent platform for military leaders to discuss strategic issues with an audience drawn from the broader Washington policy community. Recent Commanders Series events included US Marine Corps Commandant Gen. James F. Amos, US Army Chief of Staff Gen. Raymond T. Odierno, and Lt. Gen. Mark O. Schissler, deputy chairman of the NATO Military Committee.