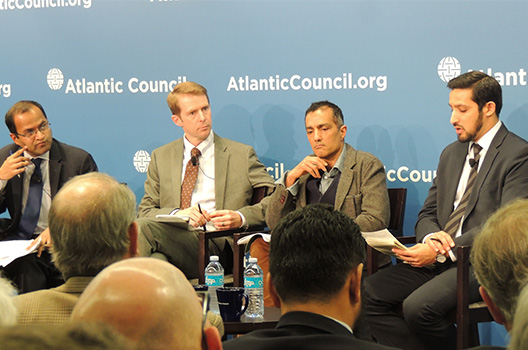 Following various news reports of an opening for a nuclear deal between the United States and Pakistan, the Center convened the panelists to provide their outlook to the impact and possibility of such a deal.

Dalton and Lalwani concurred that a nuclear deal along a clearly articulated set of restrictions and stipulations between the United States and Pakistan would be in the best interest of the both countries and the region at large. Lalwani noted that the “fog of crisis escalation in South Asia” would be significantly reduced if the United States brokered a nuclear deal with Pakistan. Even Pakistan’s primary adversary, India, would benefit from such a deal as it would reduce the threat of nuclear escalation. Unfortunately, Lalwani acknowledged, India has come out unequivocally against the possibility of a deal.

While lending support to the notion, Dalton expressed doubt whether a deal is possible given the existing geopolitical landscape and internal dynamics in Pakistan. Reflecting on the US bargaining position, Dalton noted, “There is not a lot of good leverage to be had.” Pakistan remains a key partner for the United States in the region, as the threat of extremism continues to spread and instability around the Af-Pak border persists. Therefore, the United States seems to be unwilling to jeopardize that tenuous and important relationship for an improbable agreement.

“Pakistan is pretty comfortable with where it is,” Dalton acknowledged, further undermining the possibility of a deal. Pakistan, according to some estimates, has the fastest growing nuclear arsenal in the world, which is also a source of national pride. These factors make it even more unlikely that the Pakistani military establishment would agree to any nuclear limitations.

Kampani offered a different perspective. He argued no hope remains for a lasting and equitable deal because Pakistan is not “normal.” As a “revisionist state,” Pakistan “presumes a radical ideology that seeks to upend the status quo.” Kampani contended that even if the United States was able to secure a nuclear deal with Pakistan, it would be a mistake absent a complete reorientation of “Pakistan’s grand strategy.” Instead, the United States should continue to work with Pakistan to become a “normal state” as a prerequisite to a nuclear deal. Kampani also noted the differences between the Iran nuclear deal and a possible nuclear deal with Pakistan, which some argue are analogous. Namely, Pakistan already has a nuclear weapons program and employs its nuclear capability for strategic defense.

Among the panelists, there was disagreement about what should be done to address this very significant threat to regional stability. However, there was consensus that complete disengagement with Pakistan would be detrimental to all involved.