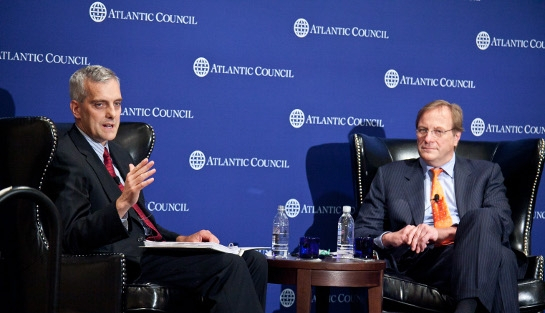 This year’s conference continues the successes of the 2009 and 2010 Members’ Conferences.

TOWN HALL: Can the United States Afford to be a Superpower? Can Europe be an Effective Ally?

Session A – Sidestepping NATO’s “Dim and Dismal” Future: Does Atlanticism Have a Future?

Session B – Doing Business in a Volatile World: The European and US Debt Crises

Session C – The Arab Awakening: How to Avoid the Transatlantic Community Missing the Boat

Session E – Exit or Exodus: Implications of the Drawdown for Afghanistan and Pakistan

TOWN HALL: Catalyzing our Allies and Partners for Global Action

A conversation with Denis McDonough, Assistant to the President and Deputy National Security Advisor
Moderated by Frederick Kempe,** President and CEO, Atlantic Council