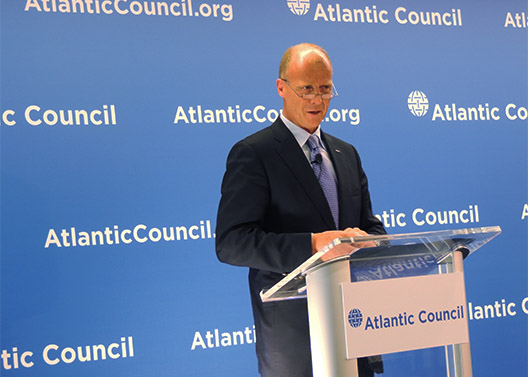 “European defense is in an appalling state,” Thomas Enders, CEO of Airbus Group said during an Atlantic Council Captains of Industry event held immediately following the Council’s two-day Toward a Europe Whole & Free conference on April 30.

Alluding to comments by former US Secretary of Defense Robert Gates, Enders provided an impassioned plea for increasing defense budgets in Europe in order to solidify transatlantic security. He mentioned how Europe’s two most advanced militaries—the United Kingdom and France—had trouble with their military operation in Libya and required American assistance. Enders believes that to revamp the transatlantic alliance, Europe must take the first steps to be better prepared militarily to deal with problems in its region. Events in Ukraine, he said, might spur European countries to reverse the downward trend. Further, Enders believes the United States should also help the European Union become more efficient and reliable on defense matters and relatively focus less on strengthening NATO.

Enders believes that the Transatlantic Trade and Investment Partnership (TTIP) would be a “very strong contributor to our alliance.” Indeed, TTIP could provide transatlantic partners and industries with the necessary capital and finances required to successfully navigate a global business environment. “Why would the Atlantic alliance let such an opportunity like TTIP go” he asked? In addition, Enders did say that he could “imagine a TTIP for defense, but not now” because Europe needs to be better equipped and prepared to deal with defense and security issues.

Enders also dove into issues of the defense industry. He believes that industry can be a strategic partner for militaries not only in Europe but also around the world. However, Europe, according to Enders, does not fully allow industry to play this role. He also believes large companies should have the impetus to influence and lead on requirements of militaries. Governments do not tell industry exactly what they need; therefore, industry should lead and let the military know what they will require to meet the challenges of today and tomorrow.

Finally, Enders also discussed the emergence of the Chinese defense industry. Chinese defense is “something to watch,” he said, and China could become a “serious competitor in…Western markets.” He regarded the Asia-Pacific as an important region for investment because of its growing commercial sector, the sector that comprises 80 percent of Airbus’ business. He also called moving into that space the company’s “biggest risk.”

This event was part of the Atlantic Council Captains of Industry series which is a platform for senior defense industry executives to address the public interests their companies serve and the public policies that shape their markets.