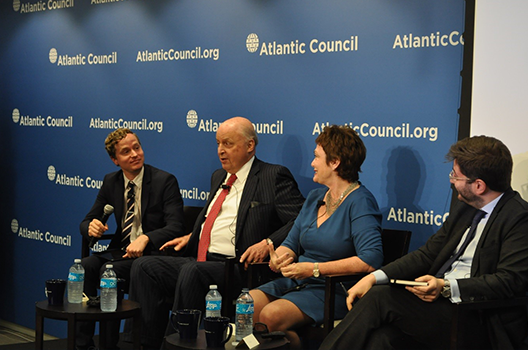 No one can say President Donald Trump’s first 100 days were uneventful. First met with unprecedented opposition, the administration proceeded to swiftly implement the vision Trump laid out on the campaign trail. However, he has had both high-profile setbacks, like not being able to get an Obamacare reform bill to the floor, and positive developments, like the widely praised Syria strikes. Meanwhile, Trump seems to already be changing his mind on many of his most remarkable foreign policy stances on the campaign, for example, that NATO is now no longer “obsolete” and that he will not label China a currency manipulator.

The question at and past the 100 days mark is: what next? What else is there to expect from the Trump administration both at home and abroad beyond the first 100 days? Are the latest personnel issues and policy stances a sign of things to come? Or are these just the natural growing pains of a new presidency? To answer these questions, the Atlantic Council hosted a high-profile panel of experts and leaders on Monday, May 1, 2017. Atlantic Council Millennium Leadership Fellow Manuel Muniz joined Ambassador John Negroponte and Congresswoman Ellen Tauscher to discuss what is next for the Trump administration
and US foreign policy. John Hudson of BuzzFeed News moderated the event.