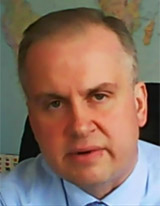 The plan by pro-Russian separatists in eastern Ukraine to hold a referendum Sunday on secession amounts to “actions by some isolated groups” that will yield “no result,” Ukraine’s Deputy Foreign Minister Danylo Lubkivsky said in an online discussion with the Atlantic Council.

“The so-called terrorist referendum, [is] illegal, and of course there are no conditions for anybody there to hold these kind of activities,” Lubkivsky said from his office in Kyiv. He spoke in a session moderated by Atlantic Council Executive Vice President Damon Wilson.

In response to a question, Lubkivskiy did not say what steps if any the Ukrainian government may take to prevent the attempt to organize voting in towns or cities that are partly or largely controlled by the separatists.

Russian President Vladimir Putin’s public call for the separatists to postpone the planned plebiscite “is a mockery and by no means is a sign of good will,” Lubkivsky said, because Russia continues to back separatist violence. “We can’t trust their words,” he said of the Russian government’s statements.  He repeated Ukraine’s call for Russia to implement last month’s Geneva agreements aimed at reducing the conflict, demanding that Russia “cease action by subversive groups” that he said it supports in Ukraine.