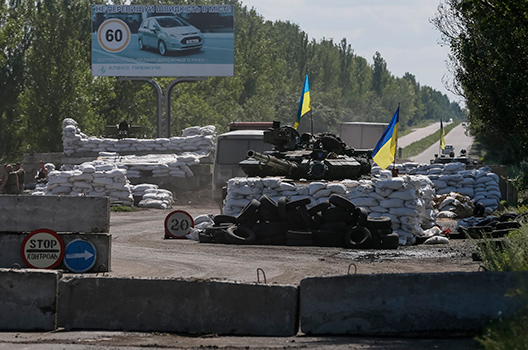 In the shadow of a billboard for new cars, sandbag barricades and a tank form a Ukrainian military checkpoint on a road outside Konstantinovka on July 10, three days after government troops re-captured the city from Russian-backed separatist militias. The army has advanced beyond the city, toward the provincial capital of Donetsk, about 35 miles to the south, the government’s National Security and Defense Council said July 9. (REUTERS/Gleb Garanich)

Kyiv Official Thanks US for Food Rations and Vests, Says Ukraine Needs Sanctions on Russia

Ukrainian troops now control two-thirds of the country’s Donbas region, a top Ukrainian security official says, nine days after they resumed their counter-offensive against Russian-backed insurgents. Ukraine’s military “will continue to tighten the containment” of the separatist militias, and will support local civilian populations in pressing militia units to disband and send their Russian fighters back to Russia, said Andriy Parubiy, the secretary of Ukraine’s National Security and Defense Council.

“Our plan will include both blocking the terrorists within the zones that they hold, and supporting the local people,” Parubiy said in an online discussion moderated by the Atlantic Council’s Damon Wilson. “We already have seen situations in which local residents have been asking the terrorists to get out of their neighborhoods, and thus dismantling the terrorists’ strongholds by themselves.” Ukrainian officials say they have been working to elaborate a plan to defeat the separatist militias without making a frontal assault on the densely populated provincial capitals, Luhansk and Donetsk, where they are now concentrating as they retreat. The separatist fighters, who at their peak numbered perhaps 50,000, now have fewer than the 20,000 combatants they claim to be assembling in Donetsk, the Donbas region’s largest city, Parubiy said.

Nine days after resuming their counter-offensive against the Russian-backed militias, Ukrainian troops have established control at all road crossings of the Ukrainian-Russian border, blocking any further supply of tanks, armored vehicles or supply convoys to the separatist fighters, Parubiy said. Still, terrorists are trying to bring weapons, ammunition and reinforcements over the hills, through the forests and across the Sivertskyi Donets River,” which forms the border east of the city of Luhansk, he said. While Ukrainian troops are trying to shut down these off-road supply routes, “we believe that smaller groups are still getting across the border.”

New Evidence of Russia’s Sponsorship of War in Ukraine

The separatist militia’s chaotic retreat this week from the Ukrainian army assault on their former military headquarters at Slaviansk has produced more clear evidence of Russia’s role in sponsoring the war, Parubiy said. Ukrainian troops have recovered weapons manufactured in Russia and separatist leaders this week disputed openly with their backers in Moscow this week over whether the amounts and types of weapons sent from Russia were sufficient, even posting videos of their arguments on YouTube.

“In their public quarrels, the terrorists have started to expose even the numbers and specific details of the weaponry that the Russian side has sent to them,” Parubiy said.

“Today, [Russian army Col. Igor] Girkin, the so-called minister of defense of this so-called Donetsk People’s Republic, who escaped from Slaviansk, gave a TV interview in which he was blaming the local population for failing to join the terrorists,” Parubiy said. Girkin “said openly that they are ready to pay 8,000 hryvnia, about $700, to anyone who would like to join” – another sign of the separatists’ weak support among Donbas residents, and their consequent dependence on Russian ultra-nationalist fighters and mercenaries.

Startling evidence of the separatists’ role as a Russian government proxy force is that the militias have handed over their most prominent prisoner from the war – Ukrainian military pilot Nadiya Savchenko – to Russian government custody. A separatist militia in Luhansk province captured Savchenko last month, and displayed her in a videotaped interrogation of her posted to YouTube on June 19.

“Right now, Ms. Savchenko is located in sovereign Russian territory, and this is clear, hard proof of how close is the cooperation between the terrorists fighting in Ukraine and the Russian government. She was captured by the terrorists … near the city of Luhansk,” said Parubiy. “This is Ukrainian territory. How did she get to Russian sovereign territory?”

Among the highlights of Parubiy’s discussion were these: