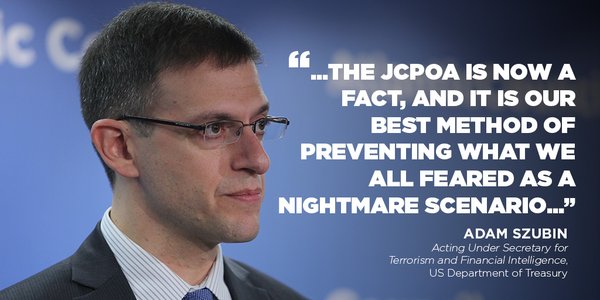 “The ultimate success of any sanctions program is its demise,” stated US Department of the Treasury’s Adam Szubin, arguing that sanctions should not be a product of anger but “a means to an end.”

Szubin, the Acting Undersecretary for Terrorism and Financial Intelligence, spoke at the Atlantic Council and Iran Project conference, “Implementing the Iran Nuclear Deal: What’s Next?” As the first representative from the Department of the Treasury to address the Iran deal at the Atlantic Council, Mr. Szubin provided a first-hand perspective on the JCPOA and its impeding implementation.

Szubin continued by outlining the details of the agreement and what sanctions relief means for Americans and American businesses. “The deal is front-loaded,” Szubin noted, referring to the fact that upon IAEA verification of Iran’s nuclear disarmament, massive sanction relief will ensue.  “The US treasury does not intend to get in the way of legitimate business.” However, Szubin assured, US sanctions will continue after implementation. Not only will US companies continue to be prohibited from engagement with Iran but the sanctions that are not tied to the nuclear issue will remain in full force. “Iran’s support for the Houthis [in Yemen], Assad [in Syria], and human rights abuse,” all have sanctions attached that will remain in-effect. Specifically, the list of over 200 Iranian people and companies will remain barred from the international financial system.

Szubin also addressed the JCPOA’s snapback provision, which ensures that US sanctions would return should Iran violate the agreement. “It’s a simple matter,” referring to the operationalization of snapbacks, but I “hope there is no need.” When asked about the kind of violation that would merit snapback of sanctions, Szubin elaborated that “if we see a small deviation, our first impulse is to see if Iran can fix it, not snapback the sanctions.” Fielding a question from the audience regarding the wave of complaints in the past week that Iran had already violated the agreement with a missile test, Szubin clarified that Iran did not violate the JCPOA, however it did violate a UN Security Council resolution. “We need to distinguish between those violations,” Szubin argued.

As an informed practitioner, Mr. Szubin concluded that the JCPOA is the “best method to prevent a nightmare scenario: a state sponsor of terrorism having hold of a nuclear weapon.”