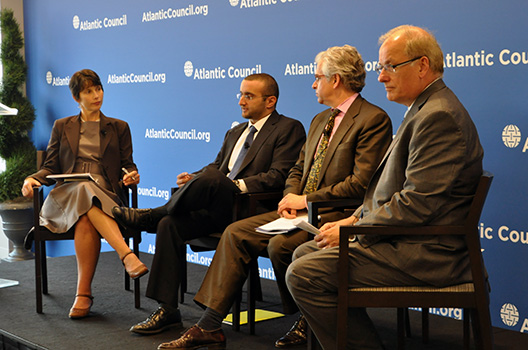 The Islamic State of Iraq and Sham (ISIS) continues to capture more territory and resources in both Iraq and Syria, making real progress in achieving their ultimate goal of establishing an Islamic State. On Thursday, June 26, 2014, the Atlantic Council’s Rafik Hariri Center for the Middle East and Brent Scowcroft Center on International Security cohosted a panel discussion featuring Hariri Center Fellow Faysal Itani, Senior Fellow Frederic C. Hof, and Barry Pavel, vice president and director of the Brent Scowcroft Center on International Security. Itani presented key findings from his latest publication, “Losing Syria and Iraq to Jihadists,” on the rise of ISIS and possible US policy options to counter the threat that ISIS poses. Hariri Center Acting Director Danya Greenfield moderated the discussion.


Itani attributed the rise of ISIS primarily to the weakness and dysfunction of its rivals and the United States’ continued reluctance to support moderate Syrian rebel groups. Itani argued that Syria and Iraq are becoming factories for producing violent extremists, thus continuing to ignore the issue is not in the US interest. ISIS’ recent advances in Iraq have reshaped their threat from “local and self-consuming” to “global and self-perpetuating.” The only good option available, Itani argued, is for the United States to lead an offensive against ISIS through the moderate rebels in Syria. Ambassador Hof, supporting Itani’s argument, added that this is a critical moment for the Obama administration, as it must pursue a sound strategy in combatting the ISIS threat before the crisis “blows up in their faces.” Hof argued that the Obama administration is “overanalyzing” the possible strategies, therefore halting any progress for further US involvement in the crisis. Pavel addressed the issue in the context of a changing global order. He argued that time is not on our side; the lack of action by the US government is turning peaceful groups in the region against the United States. Pavel insisted that the Sunni population, in both Iraq and Syria, must be seen as a separate entity from ISIS, and their support is vital to eliminating ISIS from the region.