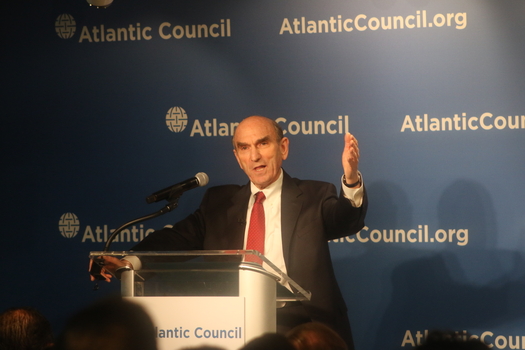 On Thursday, April 25, the Atlantic Council’s Adrienne Arsht Latin America Center hosted the US Special Representative for Venezuela Elliot Abrams to discuss what an inclusive democratic transition in Venezuela looks like. The event convened key figures representing both the Venezuelan opposition and the dissident Chavismo, who are committed to bringing about a return to democracy in Venezuela.

The event opened with welcome remarks from Fred Kempe, President and CEO of the Atlantic Council, followed by a keynote address by the US Special Representative for Venezuela, Elliott Abrams. Following his policy address, Special Representative Abrams joined a panel to discuss the democratization process that Venezuela needs and the challenges that these democratic forces are facing. The panel was moderated by Jason Marczak, director of the Adrienne Arsht Latin America Center, and included Carlos Vecchio, Venezuelan ambassador to the US; Gabriela Ramírez, former ombudswoman,; and Dr. Jonathan Powell, professor of political science at the University of Central Florida.

Fred Kempe opened the event by noting that “there is a contest going on globally between democracies and autocracies, and the outcome in Venezuela will have not only national consequences and regional consequences, but [it will] also have global importance.” Moreover, Kempe highlighted the importance of the event given the participation of actors from across the political spectrum, which “demonstrates a growing recognition that the path to a peaceful and sustainable democratic transition and a return to a pluralistic, liberal democracy in Venezuela will require the inclusion of a diverse of voices, experiences and political affiliations.”

In his address, Abrams called for unity to accelerate Venezuela’s democratization process. “Like all of the country’s citizens, the PSUV [The United Socialist Party of Venezuela] is entitled to a role in rebuilding the country,” said the Special Representative for Venezuela.

Abrams recognized that following the last free elections in Venezuela, the 2015 National Assembly elections, the PSUV won fifty-five parliamentary seats; therefore, they still have a strong base of support. With the understanding that dissident voices and actors from other political leanings should be part of the country’s democratic transition, Special Representative Abrams appealed to them and invited PSUV representatives to “take those seats, join the national debate, not tomorrow, but right now.”

Regarding Venezuela’s relationship with its armed forces after a transition, Abrams pointed out that “many democratic transitions grapple with the issue of amnesties or protections for former military official. We saw this in Poland, Eastern Europe, South Africa, and Chile. Venezuelans will have to work this out. The US will seek to respect the agreement made among Venezuelans.”

For the panel discussion, Jason Marczak sat down with Special Representative Abrams, Ambassador Carlos Vecchio, Gabriela Ramírez and Jonathan Powell to further understand the role of dissident voices and those who represent other political leanings in Venezuela’s democratic transition.

Ambassador Carlos Vecchio highlighted that the Interim President of Venezuela, Juan Guaidó, has repeatedly stated that Venezuela’s reconstruction will require the participation of all citizens. “The regime created divisions among Venezuelans to weaken our spirit, to divide and conquer. We won’t allow that to happen,” Vecchio stated.  Regarding the guarantees that the Venezuelan interim government is willing to provide to dissident voices, the Venezuelan Ambassador to the US stated that “the best guarantee that we will offer is that nobody will be condemned for political affiliations. We are not building a country based on hatred and division, but one based on the rule of law.”

Gabriela Ramírez, who represented the voices of dissident Chavismo, explained that dissidents “broke with the Maduro regime when it started twisting the foundation of Chavismo.” This group of dissidents were fueled by their mission to “rescue the Constitution that has been supported by Venezuelans at different times and through different elections.” Ramírez stated that the Maduro government broke the country’s core value of popular sovereignty and placed all the power in the hands of only one individual. Ramírez emphasized that this transition is not about retaliation. She urges that there is a need to figure how to incorporate dissident Chavismo in the transition process and to guarantee social rights to all Venezuelans.

Providing his expertise in democratization and civil-military relations, Dr. Jonathan Powell established that during a democratic transition “dissidents can help or disrupt processes of free and fair elections. The Chavista movement has been incredibly important to the country and we need to have these voices included.” Concluding the event, Dr. Powell stated that “in other countries where there have been civil wars, we see that for [democratic] processes to succeed there has to be forgiveness and then respect [for] the government that wins.”