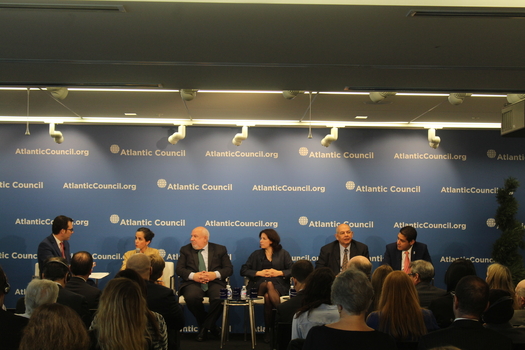 On April 30, the Atlantic Council’s Adrienne Arsht Latin America Center hosted “Venezuela’s Humanitarian Crisis: Searching for Relief.” The event sought to explore different perspectives on what has quickly become one of most disruptive developments in the Western Hemisphere: the humanitarian crisis in Venezuela. Held in Washington DC in collaboration with the regional news channel NTN24, the event explored the multiple dimensions of the crisis and its reverberations across the region, drawing on the knowledge and experience of a group of expert panelists working in the context of humanitarian situations.

Jason Marczak, director of the Adrienne Arsht Latin America Center, opened the event by emphasizing the importance of sustained international attention to the crisis and of the need to move the needle forward on relief. Drawing on two polls released by the Atlantic Council, Marczak exposed the profound toll the crisis has taken on Venezuelan citizens across party lines. He provided insight on some of the most trusted institutions in the eyes of Venezuelans like the Catholic Church, outlining potential avenues for the provision of relief into the country.

Marczak then welcomed Michael Fitzpatrick, deputy assistant secretary at the US Department of State’s Bureau of Western Hemisphere Affairs, for a conversation that broadened understanding of US policy toward Venezuela. The discussion touched on the role of sanctions; the part of US leadership to facilitate coordinated action; and the impact of US lending to neighboring countries at the frontlines of the humanitarian spillover. Deputy Assistant Secretary Fitzpatrick was precise in pointing out that the United States “…continues to focus on finding ways to reinforce independent actors in Venezuela: The National Assembly, civil society, journalists and others…” The goal, he exposed, is to ensure that whatever is left of the social fabric of the country is strengthened.

Gustau Alegret, US news director of NTN24 and moderator of the second panel, then introduced the panelists: Diego Beltrand, regional director for South America at the International Organization for Migration (IOM); Chiara Cardoletti, deputy regional representative to the United States of America and the Caribbean for the UN Refugee Agency; Julio Castro, professor of the infectious diseases unit at the Universidad Central de Venezuela’s Institute of Tropical Medicine; Susana Raffalli, Venezuela humanitarian expert and consultant of Caritas Venezuela; and José Manuel Olivares, representative of the state of Vargas for the National Assembly of Venezuela.

The conversation started with an assessment of the humanitarian crisis in Venezuela. Susana Raffalli noted the increase in child malnourishment (0-5 years of age) from 10 percent in February 2017 to 17 percent in December 2017. Raffalli stated that this figure “…long exceeds the threshold of what we typically consider a humanitarian crisis.” On the other hand, Julio Castro noted that “…the rate of maternal mortality has gone back to what it was in 1965.” Castro pointed out that the scale of the crisis has no precedent in countries that are not experiencing armed conflict, thus singling out Venezuela’s case. Furthermore, the panelists emphasized that the deterioration of the crisis is strictly related to its prolongation and its complex nature.

Regarding the migration effects of the crisis, the panel discussed how the continuous flow of Venezuelans had put significant economic, social, and political strain on neighboring countries. Diego Beltrand noted that “…the IOM estimates that in the last two years over 1.6 million Venezuelans have left the country, mainly to countries in Latin America.” Acknowledging Venezuela’s past role as net recipient of immigrants, Cardoletti noted it is time for the region to reciprocate – as indeed it has been doing. This is one of the top priorities for the IOM according to Beltrand, stating that “[as] time goes by, the capacity of countries to lend support may dwindle.” However, Beltrand trusts that we will continue to witness solidarity from neighboring countries.

The panel also discussed the government’s lack of willingness to recognize the country’s state of emergency, and the need to mitigate its effects. José Manuel Olivares emphasized the implications of this approach, recalling the setbacks when he built a coalition that approved legislation to acknowledge the crisis, thus facilitating medical and food imports. Olivares stated that “the federal government actively boycotted the proposal, despite overwhelming bipartisan support.” Therefore, not recognizing the humanitarian crisis is a conscious, official policy decision by the Venezuelan government to shut down hopes of a collaboration between official and non-official entities. Similarly, Julio Castro noted that actors who are outspoken about the government’s unwillingness to collaborate often pay a steep price. Castro described that doctors and local leaders who speak against the government are “labeled as terrorists.”

Despite the various obstacles, such as the country’s pervasive corruption and the government’s use of social control mechanisms in the distribution of food and medical supplies, local leaders continue to mobilize and provide relief in any way they can. Such efforts are possible due to the Venezuelan diaspora and should not go unnoticed. Susana Raffalli observed that in recent months there has been an increase in the amount of international aid reaching the country, and the government’s willingness allowed its continued flow. Raffalli suspects that the government’s newfound willingness, ‘…is probably because of the coming [May 20] elections.” Despite this short-term incentive, a more extensive scale of collaboration between the government and non-governmental organizations will be necessary to address this crisis comprehensively.

As the event concluded, the panelists emphasized the importance of the international community to exert pressure on the government to change its behavior and to finally fulfill its duty to its citizens. They added that the Venezuelan diaspora will play a key role in elevating discussions across the international sphere. Domestically, collaboration between local non-profit organizations will be critical to execute relief efforts and to identify the needs of the Venezuelan population.