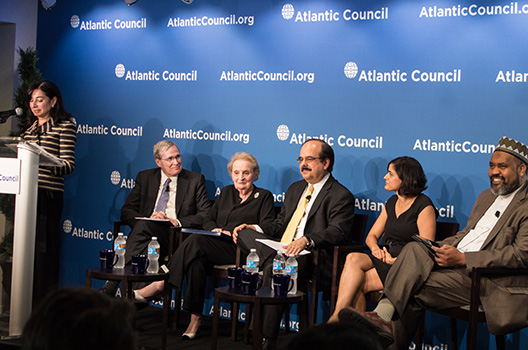 On June 9, 2015, the Atlantic Council’s Rafik Hariri Center hosted What’s Religion Got to Do with It?, a Middle East Strategy Task Force (MEST) event featuring Co-Chairs Madeleine K. Albright and Stephen J. Hadley with a panel discussion on the role of religion in the region’s conflicts.

Geneive Abdo, Convener of the Task Force’s “Religion, Identity, and Countering Violent Extremism” working group and a Fellow with the Stimson Center’s Middle East Program, framed the evening’s program as an attempt to examine the current rise in identity politics and sectarianism in the region and consider how religion contributes to current crises and might also help mitigate them. Former US Secretary of State and MEST Co-Chair Albright then took the stage to recall her own interest in the intersection of religion and politics while she headed the Department of State and while writing her book on the subject, The Mighty and the Almighty. Albright likened the issue of addressing the importance of religion to brain surgery: necessary to do but easy to make a slip and create even more problems.

The panelists each presented their own views and findings on the subject. Neha of the Pew Research Center presented data on extremism and sectarianism in the Middle East and beyond, and explained how that data can inform our understanding on the driving factors of extremism. Among the findings derived from her study was a correlation between knowledge of other religions or sects and a sense of common ground with those groups. Her data also indicated that there is little or no relationship between an individual’s personal religiosity and his or her support for extremism.

Imam Mohamed Magid, Executive Director of the All Dulles Area Muslim Society (ADAMS), explained in his presentation that religiosity does not imply intolerance, and urged the audience to look at the good examples of religion too, such as countries in which religions coexist with interfaith groups that work to foster understanding and counter radical ideology.

Alberto Fernandez of the Middle East Media Research Institute (MEMRI) followed by discussing his previous tenure as the US Department of State’s Coordinator for Strategic Counterterrorism Communications and how social media acts as a lens reflecting a certain ideological reality. He pointed out that the Islamic State (ISIS or ISIL) has existed for over ten years, but previously focused solely on internal Iraqi issues. He attributed the group’s expansion to the broader Middle East and assumption of apocalyptic rhetoric to 1) its physical and virtual move into Syria; 2) its decision to sidestep the exclusive al-Qaeda model and move to a more populist model using Twitter and other open platforms to convey its message; and 3) its decision to create English-language propaganda materials. He noted the dynamism of ISIS’s media network and explained how the group has capitalized on the virtual jihadist counterculture and the democratization of religious discourse over the past decade.

Hayder al-Khoei, an Associate Fellow with Chatham House’s Middle East and North Africa Program, began his presentation by pointing out that our first job is to define both religion and politics. He went on to suggest that the two elements overlap. He explained that religion itself is a necessary component of any attempt to solve religious conflict and reminded the audience that we cannot simply import Western models and expect them to work. He highlighted the role of the Saudi-Iran rivalry in fueling regional sectarianism but insisted that there is space for dialogue on the ground.

The discussion then moved into a question and answer section, moderated by former US National Security Advisor and MEST Co-Chair Hadley. He began with a question for Imam Magid, asking how, in his counseling sessions with radicalized youth, the role of religion factors both into the youths’ views. Imam Magid explained that a commonality among those he counseled was a desire to go to Syria and join ISIS in order to find purpose and a platform to make a difference. He argued that the approach to counter ISIS recruiting must be holistic. Hadley then asked Fernandez whether the United States incorporates religious discourse into its attempts to counter extremist propaganda, to which Fernandez responded that the United States avoids making religious claims itself but instead turns ISIS’s arguments back on them by, for example, showing the group killing Sunni Muslims despite its claim to represent and protect them. Sahgal responded to a question from Hadley on government restrictions on religious groups, noting that her research indicates that there is indeed a high correlation between government restrictions on religious-based groups and religion-driven social hostility, suggesting that the inverse may be true as well. An audience member asked al-Khoei if he thinks the destruction perpetrated by ISIS could be dwarfed by a broader, state-based sectarian war akin to the Iran-Iraq war. Al-Khoei responded that he believes that rather than an inter-state war in the region, the greatest threat is more of the same, and noted that another group could dwarf ISIS by out-radicalizing it; therefore the root causes of sectarian extremism, such as intolerant education materials, must be addressed.

The discussion concluded at sunset and guests enjoyed an Iftar reception and listened to remarks and blessings from Ayatollah Ahmad Iravani, President of the Center for the Study of Islam and the Middle East at the Catholic University of America.