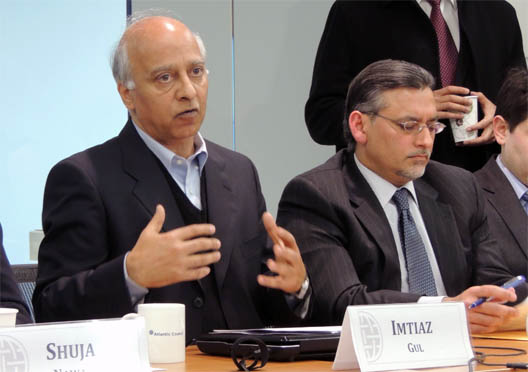 While Pakistan’s government and its Taliban movement formally have started peace talks, events there suggest that the coming months may as likely bring a Pakistani military offensive, long sought by the United States, against the country’s biggest territorial stronghold of the Taliban and other militant groups. In latter January, the Pakistani military and the Taliban traded their heaviest attacks on each other in recent months, many of them around that stronghold, the district of North Waziristan.

If an offensive goes ahead, Pakistan’s military will be unable to take full control of North Waziristan, a ruggedly mountainous zone slightly larger than the US state of Rhode Island, said Imtiaz Gul, executive director of the Center for Research and Security Studies in Islamabad.  And no offensive will significantly weaken the militant groups based in North Waziristan unless US and Afghan forces are able to block the mountainous border and prevent the escape of militant fighters into Afghanistan, Gul told a February 10 conference sponsored by the Atlantic Council’s South Asia Center.

Surgical strikes informed by good intelligence may be able to weaken the Taliban’s leadership, Gul said. On the night of January 20, Pakistan’s air force attacked villages in the Mir Ali area of North Waziristan, the second time in a month that Pakistan has launched such air strikes.  Those strikes have come as the United States effectively has suspended (since December 25) its campaign of missile attacks from remotely piloted drones, a campaign that that overwhelmingly has targeted militant groups in North Waziristan.

As Gul spoke in Washington, Taliban leaders in North Waziristan hosted a team of mediators for talks with the government that began in earnest this week. Those negotiations are not likely to bring a real reconciliation between the two, but may help the government of Prime Minister Nawaz Sharif demonstrate to Pakistanis that it seriously attempted peacemaking before any eventual military assault, said Arif Ansar, the chief analyst and CEO of PoliTact, a Washington-area strategic consulting firm.

Sharif won election in last year promising to favor negotiations, rather than military attacks, in an effort to halt the Taliban insurgency of recent years. He faces political pressure against an assault on the Taliban from opposition leader Imran Khan. Khan says the Taliban movement will subside after US forces withdraw this year from their combat role in neighboring Afghanistan.

But the just-started peace talks are likely to underscore the deep political and cultural divide between the government and the Taliban, Gul said. The Taliban demand that Pakistan’s constitution be scrapped and that Islamic sharia law be used to rule the country.

Gul, an ethnic Pashtun researcher and analyst, spent decades reporting on Pakistan and its borderlands for Die Deutsche Welle and other news organizations, and has traveled often in the Pashtun borderlands with Afghanistan that gave birth to the Taliban movement. Gul’s 2010 book on the growth of violent militant groups in the Pashtun lands, and their growing threat to Pakistan, is The Most Dangerous Place: Pakistan’s Lawless Frontier.