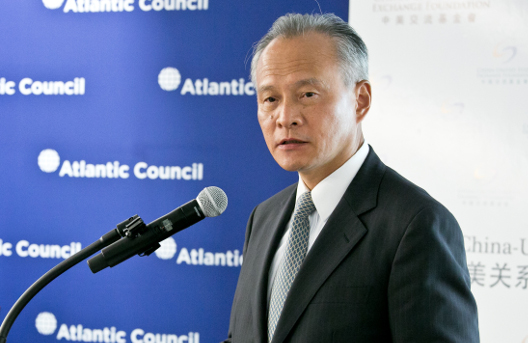 Prepared remarks by Ambassador Cui Tiankai of the People’s Republic of China delivered at a launch event for the report China-US Cooperation: Key to the Future on September 17, 2013.

First of all, I want to thank the Atlantic Council, China Institute of International Studies and China-United States Exchange Foundation for inviting me to today’s report launch. I also want to thank all the members of the Joint Working Group for their hard work in putting together the report. In particular, I’d like to recognize and extend my appreciation to General Scrowcroft, Chairman C.H. Tung and Mr. Hadley. For years, you have been strong supporters for China-U.S. relations and have made significant contributions to this relationship in different periods of time and in different ways. Your vision and dedication have reinforced our confidence in the future of China-U.S. relations. And I am also very happy to see Minister Li Zhaoxing. I think all of you know him very well. He was the Chinese Ambassador in Washington DC in some of the critical years in our relationship.

This is the second report that I have witnessed in the past three months, which is supported by the China-U.S. Exchange Foundation. When the first report, “US-China 2022: Economic Relations in the Next 10 Years”, came out in May, we were in the middle of intensive preparation for our two Presidents’ historic meeting in California. And now, three months later and just days after another successful meeting between President Xi Jinping and President Obama in St. Petersburg, you are releasing another important report, “China-U.S. Cooperation: Key to the Global Future”. Here I want to commend your efficient and fruitful work.

Over the past few months, we have seen some new and satisfying developments in China-U.S. relations. When our two Presidents met at Sunnylands, California in June, they agreed to build a new model of relationship free of conflict and confrontation and characterized by mutual respect and win-win cooperation. This has set the goal for the relationship. After that, our two teams have been working together to follow up on that great vision. The 5th Round of Strategic & Economic Dialogues was held in July, which was very successful and productive. It is particularly encouraging to note that there have been positive exchanges and engagements between our two militaries. General Chang Wanquan, China’s Defense Minister, came for a successful visit in August. Just a week ago, Admiral Wu Shengli, the Commander of the PLA Navy, also paid an official visit to the United States. He brought with him the Captain of China’s first aircraft carrier. Three Chinese naval ships had a port call to Honolulu 10 days ago, the first such visit in 7 years. Internationally, the two countries continue to work closely on a wide spectrum of issues, including the global economy, the Korean Peninsula, Syria, and many other critical global and regional issues. The two Presidents gave a very positive evaluation of the progress so far during their meeting in St. Petersburg, and they agreed that the two sides should continue to go along this track.

So it is fair to say that we are already moving forward to the establishment of a new model of relationship. But more needs to be done. The ultimate goal of building such a relationship is to achieve win-win results that will not only benefit the Chinese and American people, but also people all over the world. In this regard, the report before us offers a thought-provoking perspective. It gives us a clear picture of the critical megatrends and key uncertainties in the world today and tomorrow. And it has made a compelling case why China and the United States should join hands and step up cooperation to respond to all the challenges in the interest of world peace and prosperity and the well-being of the mankind. This is a responsibility that we ought to shoulder being the largest developed country and the largest developing country in the world. This is also an expectation placed on us by the international community that we have to live up to.

Going forward, we need to further develop the ideas of the report, pursue and test its recommendations, and, most importantly, heed its call for action. In order to contribute to our joint efforts, let me try to make a couple of observations.

First, we should waste no time. The megatrends outlined in the report are for the long run. But they are already very much with us today, affecting our economy, our society and our life in an increasingly significant way. If we are really serious about taking the lead in forging global response to them, we have to act right now. Early action and progress here will also help build up confidence in China-US relationship and win over broader support for our cooperation. It may be appropriate to quote the late Chairman Mao Zedong, we have to seize the day, seize the hour.

Second, we should do well what we have already started together. The challenges before us are tremendous. We should have no illusions about the magnitude of our tasks. But we have already taken the first steps, though small ones, towards strategic cooperation in addressing the critical mega-issues. In the framework of Strategic & Economic Dialogues, we are working together on global and regional security, energy, environment, global economic governance and so many other issues. We have established working groups on climate change and cyber security, both started their work in a cooperative spirit. These are the building blocks for the grand strategy envisioned in the report. These are the initial steps that will help us cover a thousand mile journey if we keep moving in the right direction.

Third, we should manage our cooperation in a constructive and forward-looking way. Our two countries are very different from each other. What brings us together is mutual needs, common interests and our shared future. We will continue to have differences, disagreement and even disputes. But we should allow none of these to derail our cooperation, because none of them could outweigh our stakes in and responsibility to the global future.

Therefore, we have to always keep the big picture in sight and the larger common interests in mind. We have to respect each other’s major concerns, be sensitive when we may differ and be positive and proactive where we can cooperate. Our join response to confront the megatrends will determine our future. The way we develop this cooperation should also be future-oriented and forward-looking. We should have the wisdom and courage to break away from the old way major countries compete with each other. This is exactly, I believe, why our two Presidents have made the commitment to build a new model of relationship. They have no illusion that the two countries would become the same. But they have firm belief in the strength and complementarity of our common endeavor. They have full confidence that the two great countries will be able to work together to build a better future for themselves and for the world.