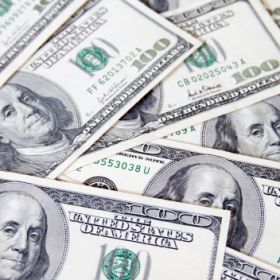 At an Atlantic Council event earlier this month, a colleague expressed his opinion that the Pentagon’s buying power will drop by half in the next five years. I was uncertain about that, so I decided to run some numbers. I will note how outgoing Deputy Defense Secretary Ash Carter says that the answer to lower buying power is Better Buying Power (BBP), the initiative by which he had set out to economize on the Defense Department’s purchases by three to five percent. But while BBP may not, as Lexington’s Dan Gouré asserts, ‘miss the mark‘, it clearly won’t fix the fiscal bogey. For my quick parametric analysis suggests that US military spending is headed much lower than people in the Pentagon care to accept, and implying budget reductions far greater than mere efficiencies can hope to address.

In the long run, military spending is a matter of taxation. In the almost-long run, the government can borrow, but to cite Herbert Stein, that bender must eventually come to an end. And the wealth that the government can extract through taxation has been surprisingly stable since the end of the Second World War. Between 1946 and 2010, US federal tax revenue as a percentage of GDP averaged 17.9 percent. The low was 14.4 percent (in 1950), the high was 20.6 percent (in 2000), and the standard deviation was just 0.9 percent.

So, unless our politics change fundamentally, here’s a rough planning assumption. Roughly $15,680 billion in GDP today × that 18% tax yield × the 16% of the budget that goes to defense today = a $451 billion annual budget, in today’s terms. Sure, that will grow over time, as GDP increases, but one should not bank on increases in the tax rate or the Pentagon’s share of federal spending. There’s neither consensus nor strong precedent for the former, and voters seem to like Social Security and Medicare a lot more than the latter.

In that long run, my estimated ceiling is at least $50 billion lower than even the dark floor of full sequestration, the $475 billion in FY 2014, less another $35 to $85 billion in emergency wartime spending. The last time the Pentagon had that level of spending was fiscal year 2001, when its inflation-adjusted budget was about $438 billion. I argue that the US was pretty well-defended back in 2001, but getting back to that level would still entail a great deal more cost-cutting than imagined today.

That’s because each of the Pentagon’s big four accounts has grown by roughly comparable and whopping amounts since 2001. Drawing the figures from the Pentagon’s latest Green Book, and using the numbers inflated to the real terms of today’s purchasing power, the picture is grim:

I must point out that even the structural changes foreshadowed by the results of Secretary Hagel’s Strategic Choices Management Review (SCMR)—three fewer carrier battlegroups, 100,000 fewer troops in the Army, another BRAC round, etc.—only accommodate a sequestered level of spending. Even the full set of those changes would not suffice to return to a level of spending constrained by the long-term potential of taxation. Because what’s required is cuts of a about a third in each of the Pentagon’s big accounts.

If carried through to its logical ends, the BBP program could garner the Pentagon billions annually. Those monies are absolutely worth pursuing. But better business practices in purchasing are not going to save tens of billions, and across accounts other than procurement. Even at a wartime peak of nearly $400 billion in annual contracted spending, BBP could only have had the ambition of saving ten to twenty billion. The problem, then, is much wider than purchasing problems, and much deeper in procurement accounts than BBP alone could solve.

In short, we can’t get there from here. No amount of streamlining or efficiencies will get us out of this problem. We have no choice but to change the fundamental structure of the costs. And that’s why sustaining any sort of procurement spending in the United States, if that remains a goal of government, must entail a wide assault on personnel costs and operations spending. Otherwise, we can all sign up for the really dark view.