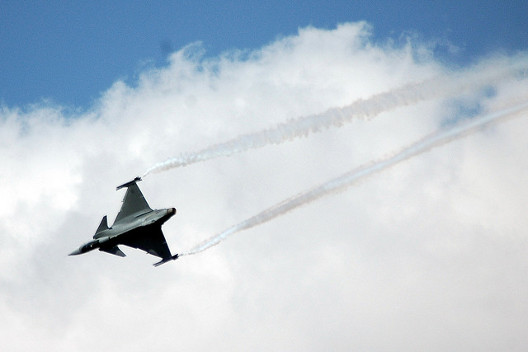 As has been widely reported, and after what The Aviationist called “ten years of negotiations and speculations,” the Brazilian federal government announced last week that Saab’s JAS-39E Gripen NG had been selected as the next fighter jet of the Força Aérea, beating out Dassault’s Rafale and Boeing’s F/A-18E Super Hornet. The timing of the announcement was unexpected, but the winner was less surprising. Brazil’s decision shows that countries of modest means and military ambitions demand value-for-money in weapons procurement, and that not all defense contractors are well-placed in that segment of the market.

Initial press coverage focused on bilateral political explanations. Outrage over American hacking of President Dilma Rousseff’s e-mail account was profound, and an American company may not have been seen as a trustworthy source of military hardware and software. As an unnamed source in Brasilia put it more bluntly to Reuters, “the NSA problem ruined it for the Americans. Was that worth $4 billion?”

But in an essay yesterday in Forbes, Richard Aboulafia took exception to that interpretation, arguing that the Gripen was really the right choice all along. Saab, he asserts, probably won the old-fashioned way—with the right plane at the right price for this customer’s needs. At the press conference, after all, Defense Minister Celso Amorim said that “the choice took into account performance, technology transfer and cost, not only for acquisition but also for maintenance.” And we can analyze the decision according to those criteria:

Performance. The Gripen NGs are planned to be similar in size and carrying capacity to the Mirage 2000s that they will replace, and they are much larger than the F-5s and AMXs that will require replacement next. Rafales and Super Hornets are much larger yet. As Aboulafia pointed out, Brazil faces no serious enemies in South America nor over the Atlantic, and thus mostly intends to use these aircraft for aerial policing. But forget that faint praise. Should Brazil join another international expedition, as it did in Italy in the Second World War, its Gripen NGs could bring to bear AESA radars, ramjet-powered Meteor missiles, and a wide range of smart munitions for attacking targets on land and at sea. They will carry less of all that than equally numerous fleets of Rafales or Super Hornets, but at some point, one must draw a line on costs. Assessment: good enough with Saab.

Technology. At $125 million per plane, the cost of this deal appears higher than for the Swiss (see below), who will pay about $110 million each. Much of that difference may come from the demand for a second center of production in Brazil, and the technology transfer needed to jump-start its effort to produce eventually its own fighter jets. The question is how much more Saab could promise than Dassault or Boeing. Saab and the Swedish government need development partners in a way that France and the United States don’t, so it’s likely that Stockholm permitted transfers of technology that Washington and Paris wouldn’t. Assessment: possible advantage to Saab.

Price. Pending final negotiations over the coming year, and including long-term service support, Saab will deliver 36 aircraft for an anticipated price of roughly $4.5 billion. The losing bids have not been made public, but as the International Business Times recalled recently, Brazilian press reports claimed that Boeing’s was around $7.5 billion, and Rafale’s about $10 billion. Dassault’s press release decried the “financial rationale” for the decision, but Brazilians have been rioting over the cost of soccer stadiums. Frankly, when you’re underbid by 40 or 65 percent, it’s really hard to win a competition. Assessment: clear advantage to Saab.

Maintenance. If Jane’s estimate of the comparative operating costs is accurate, the Gripen costs just less than $4,700 per flight hour—far less than $11,000 for the Super Hornet, and $16,500 for the Rafale. So even after the deal expires, the Força Aérea will be saving money with Gripens well into the future. Assessment: clear advantage to Saab.

In retrospect, with all that going for it, the Gripen could easily be seen as the logical option, at least for Brazil. But that’s not all. Saab now has seven national export customers for the Gripen: the Czech Republic, Hungary, South Africa, the (British) Empire Test Pilots School, Brazil, and (pending a referendum on the question in May) Switzerland. Note that Boeing has found five export customers for the F-15 (Israel, Japan, Saudi Arabia, Singapore, and South Korea), and five for the F/A-18 (Australia, Canada, Finland, Malaysia, Spain, and Switzerland). Overall, Swedish marketing performance has been impressive.

What’s evident in these comparative lists is what Saab’s customers have in common: modest military needs, (mostly) modest economic means, and modest ambitions for their bilateral security relationship with the United States. Switzerland is a neutral country, historically concerned foremost with territorial defense. While the country is even wealthier than Sweden, governments there have long stressed value-for-money in military procurement. Extra capabilities are of questionable value. The rest of Saab’s customers are countries with citizens of modest means: the Czech Republic has the highest per capita GDP in the group, at about $18,600 in 2012. Excepting Malaysia, all of Boeing’s customers are quite wealthy. Most also greatly value their bilateral security relationships with the United States. While some of Saab’s customers are American allies as well, they are not quite as closely attached. In this latest case, the NSA’s misbehavior certainly did not help, but US-Brazilian ties were not so demanding to begin with.

Saab thus has succeeded precisely where it should have, and market reaction has been swift. After the announcement, Saab’s share price immediately increased by 30 percent, subsiding on the day to 23 percent, and adding $330 million to the company’s value. Assuming that the timing of the revenues and profits are roughly matched, this implies a post-tax margin of just over seven percent, which is reasonable for an export sale. Investors’ reaction may not be considering how many more customers may view Brazil’s endorsement. If one country’s recognition of Gripen’s value proposition indicates how other countries in similar circumstances may buy, then Saab’s run may not be over.