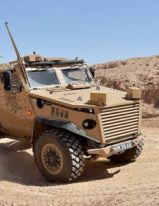 The huge news in the industry last week was huge contract that General Dynamics Land Systems (GDLS) Canada won in Saudi Arabia. Only governmental announcements and filings in Canada and the US have revealed the identity of that buyer, as the terms of the contract preclude such an admission directly from GDLS. After that, details get even sketchier. But even a quick analysis tells us how useful this deal will be to sustaining the industry in North America.

That deliveries will not begin until 2016 suggests that some modest development work remains, so most likely, the winning product is some extension on GDLS’s Piranha V prototypes.

With that in mind, we can next ask where is this money going? The deal spans fourteen years, with $10 billion guaranteed, and up to another $3 billion in options. But how much of the more than $700 million annual average is destined for design, production, training, sustainment, or other categories? The first two categories are the most strategic, as they are hard to jump-start in wartime. The bulk of the work will be accomplished in Canada, but some will be allocated to GDLS facilities and subcontractors in the US, and some of the engineering work will be undertaken at GDLS Santa Bárbara in Madrid.

The Saudis are known to prefer turnkey deals, in which a single contractor provides the equipment, trains the troops, and maintains the equipment. That fits with the long duration of the contract, and the high ratio of the guarantee to the total option value. A wholly new equipment set will require a large expenditure on upfront training, followed by a recurring investment as the ranks turn over. We also know that some development work remains. All of this explains why the production price in deals like this often amounts to less than half the total, as may be the case here.

The vehicles will be built from 2014 through 2019, which suggests about five years of serial production. GDLS has recently produced, amongst factories in Ontario, Ohio, and Alabama, as many as 300 LAV-III Strykers annually for the US Army. From news reports in the CCV competition, and governmental filings in France and Germany, we know that vehicles like the Piranha V can cost as much, even in large quantities, as $5 million each. But even at that price, half of the ten billion over five years is a billion dollars in annual production. Total deliveries could readily exceed 1,000 vehicles, which would fit within GDLS’s capacity, but easily keep the factories humming.

In contrast, the US procurement and upgrade budget for armored vehicles over the next five years will be at best a few hundred million annually. This deal is a very big deal.

But how important is this strategically for Canada and the US? Let’s first take stock of the industry. The deal does not address the issue of tracked vehicle manufacturing for the two countries fleets of Abrams, Leopards, and Bradleys. If GDLS is indeed building all these vehicles in-house, then the deal does not address the utilization of talent and capacity at the competing wheeled vehicle manufacturers: Oshkosh, Navistar, Textron, and AM General.

But as I have argued previously, neither issue should not cause great public concern. The MRAP experience demonstrated that wheeled vehicle manufacturing can surge in wartime from commercial capacity, licensed technology, and a small peacetime engineering staff. In tracked vehicles, technology is so good and stocks so plentiful that only updates and maintenance will be needed for the foreseeable future. Adding in GDLS’s work on the LAV-UP in Canada, and anything more for the LAV-III Stryker in the US, this pretty much guarantees the future of at least one large enterprise in North America through the end of the decade. After 2019, if neither the US nor Canada starts a new program, the DoD and the DND can get concerned again.

There is one last point to resolve. The most paranoid patriots in the US might insist that only Americans should be trusted as a source of long-term supply to the US armed forces. Of course, to argue to the contrary, we have as exhibits an alliance dating from at least 1917 and preferential treatment of Canadian industry in American procurement regulation. But if that weren’t enough, consider the current buyer. If the Canadians will sell to Saudis, they will have no qualms about selling to Americans.