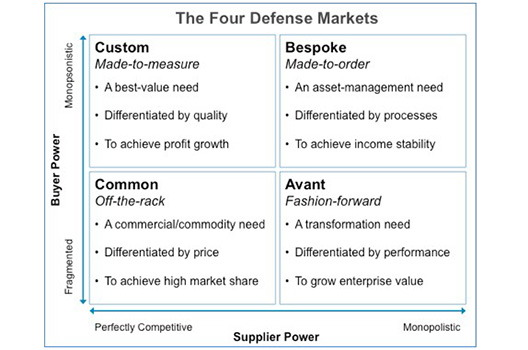 —got me thinking about menswear and defense acquisition and why they are both so persistently difficult. It’s the maddening variety of segments! If weapons were three-piece suits, the difficulty would be akin to the challenge of shopping smartly from Savile Row to Sears while still scoring points on fashionista.com.

Navigating such diverse markets without getting taken to the cleaners requires careful discernment of means and ends, one’s own and those of the vendors. There is arguably good value in a single pair of trousers costing $20, $200, or $2,000, after all, but you need to know what you’re doing. Most importantly, you need to know how to make material distinctions.

So too in defense acquisition. For our militaries’ better buyers, the obverse of Michael Porter’s catechism for a firm’s competitive advantage is equally instructive: Figure out how to exploit the particular dynamics of competition each program opportunity will activate, and you can buy the weapon with greater efficiency and productivity.

Accordingly, smart acquisition requires understanding the power dynamics in the structure of the market. And although program acquisition strategies address a multitude of product markets—strategic aircraft, armored trucks, and rocket propulsion, among them—a coarse summary of all their power dynamics suggests four meta-markets that can facilitate the making of distinctions in defense acquisition. Each of these four defense “markets” is characterized by the type of need it transacts, the form of differentiation that matters most in it, and the financial measure that shapes supplier incentives, as illustrated:

As it happens, most contemporary approaches to improving acquisition management recognize the importance of distinguishing among the different segments from which ministries can acquire their goods and services. One point of emphasis in Better Buying Power, the signature acquisition initiative of the Obama-era Pentagon, is the need to match contract types and profit rates to the market context and objectives of a given procurement. Similarly, it is an appreciation of the importance to the Pentagon of its access to more non-traditional segments that underlies provisions in the US Senate’s 2016 defense authorization bill that would create new “pathways” to the commercial sector. “Accessing sources of innovation beyond the Department is critical for national security in the future, especially in areas such as cyber security, robotics, data analytics, miniaturization, and autonomy,” reads the Committee’s overview of those provisions.

So, apparently a weapon system may yet be a three-piece suit.

Steve Grundman is the M.A. and George Lund Fellow for Emerging Defense Challenges at the Brent Scowcroft Center on International Security. This article first appeared in the 2 September edition of Aviation Week & Space Technology as “Apply ‘Bazaar’ Approach To Procurement”.