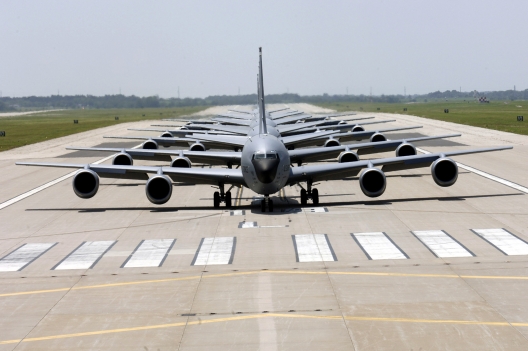 Platforms, Payloads, and the LRS-B

The other week I wrote about how the US Air Force’s projected price for its hoped-for Long-Range Strike Bomber (LRS-B)—just $550 million each—might not be believable. We will hear the argument, of course, that whatever the cost, it simply must be paid, as the alternative is an aging and irrelevant bomber fleet. Put simply, I challenge both assertions. The aircraft are not so old as claimed, and can be quite relevant, when armed and used appropriately.

Let’s deal first with the issue of age. Writing last month in The National Interest, Congressmen Randy Forbes of Virginia and Chris Stewart of Utah rather began their case for the LRS-B that way:

The bombers that remain today are rapidly aging, with many now considerably older than the crews who man them. The average age of a B-52 is fifty-two years, our B-1s average twenty-eight years, and our B-2s twenty years.

While just one more claim in a long series from bomber enthusiasts, this particular article is illustrative because it repeats an old canard. That the bombers were first built an age ago is true. That the force is now aging rapidly, however, fails as a matter of logic: how does one aircraft age faster than another? As a strict matter of time, it ages a year every year. If it is average fleet age with which the congressmen are concerned, that hasn’t been accelerating since the last B-2 bomber, the Spirit of Louisiana, entered service in 1997. As shown in an excellent graphic of the bomber fleet in the Wall Street Journal back in October, the service has been advertising that it can keep both B-52Hs and B-1Bs flying until 2040, and the B-2s longer yet. It’s hard to imagine that 2040 is rapidly approaching.

With heavy usage, of course, aircraft could be old in terms of flight hours. Back in the early 2000s, some supporters of the USAF’s bid to lease new tankers immediately from Boeing warned that the existing tankers were literally about the fall from the sky. Today those KC-135s—just as old as the B-52Hs—are still flying, and their KC-46 (767) replacements will not be available until 2018. They’re doing fine, because neither the tankers nor the bombers are really half-century airplanes. During the Cold War, when not flying for training, they most waited on strip alert. And since then, the wings, the fuselages, the engines, the cockpits—almost every part of those aircraft have been replaced. With that in mind, it’s easier to understand how a target of 2040 makes sense.

Concern that bombers designed in (literally) 1952 might be irrelevant in combat is easier to understand. But here again, advancing technology does not render all things obsolete according to a uniform clock, and that has been the case for a long time. Lord Nelson’s flagship HMS Victory was forty years old at the Battle of Trafalgar. The battleships Wisconsin and Missouri were forty-five years old when they bombarded Kuwait in 1991. The C-130 has been in continuous production for almost sixty years. In some roles, built-yesterday is an irrelevant metric.

That’s because relevance is a matter of the clock speed of technology, and also of what one asks of the system. As evidenced by the USAF’s removal of the B-52s’ machineguns in 1991, no one expects a big bomber to survive aerial combat. Even a stealth bomber isn’t survivable in daylight. Against a first-rate opponent, most of the USAF’s bomber force is actually a cruise missile force. But with a penetrating LRS-B, the USAF is aiming to replace with a gravity-bombing force.

I argue that investing in new cruise missiles is much more appealing, at least at first glance, than investment in new bombers. Tom Colina of the Arms Control Association wrote quite negatively about cruise missiles (at least those with nuclear warheads) in Defense One this past Halloween. I, however, must view that argument as arms control for the sake of arms control. In complete contrast, the Navy Department is rather taken with the new (and non-nuclear) Long-Range Anti-Ship Missile (LRASM), itself a development of Lockheed Martin’s long-in-gestation AGM-158B extended range version of the Joint Air-to-Surface Standoff Missile (the JASSM-ER, that is). Fairly, the JASSM was the project the Air Force and Navy started in 1995 after cancellation of the very troubled AGM-137 Tri-Service Standoff Attack Missile (TSSAM) project, which itself began development in 1986.

With LRASMs, those not-so-stealthy F/A-18E/Fs will be a lot more effective, from much further away, against enemy ships. Naturally, something similar can be said for the heavy bombers. But as that history indicates, developing a cruise missile is no cakewalk. The issue of bombs versus cruise missiles has been around a long time. As I’ll note in a essay on the Defense Reform movement later this week, we’ve been trading off these alternatives since the debates of the 1970s. But at some set of estimates of loss rates, what makes sense is putting the money into the payload, not the platforms. That has seemed to be at least the Navy’s hedge with the F/A-18E/F, as Admiral Greenert wrote last year in Naval Institute Proceedings.