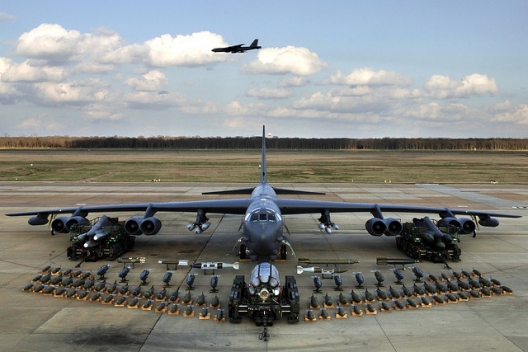 Undeterred by a declining spending, the leadership of the US Air Force has made investment in a new bomber—the Long-Range Strike Bomber (LRS-B)—a top priority. Much of the argument rests on the alleged inadequacy of equipping the current but ancient fleets of B-52Hs and B-1Bs with new cruise missiles, to extend their relevance against presumably improving enemy air defenses. Besides, they say, this time the Air Force is on a budget. Indeed, the title of a recent Wall Street Journal article on the subject observed how now the “Pentagon Toils to Build a Bomber on a Budget”—perhaps in contrast to its last efforts.

For more on those, read on. Note first that I remain unenthused. For whatever the debate over the suitability of B-52Hs and B-1Bs in a big war, their replacements will be not so cheap as to warrant jumping into a new program when finances are so tight.

In contrast, writing in Forbes, Loren Thompson argues that the USAF’s price estimate of $550 million each, or $700 million including development costs, is a bargain. After all, he says, the A380 jetliner probably retails for at least $400 million each, and it just delivers people and cargo, without having to penetrate dense air defenses.

I might agree, if I believed that estimate. For history is not on the side of the Air Force.

Let’s consider just how realistic that estimate of development costs might be. For an anticipated production run of 100 LRS-Bs, $150 million in development costs per plane would be amortizing a total non-recurring bill of $15 billion. For comparison, take the cost of the last big stealth bomber, Northrop’s B-2A. According to the GAO’s report in 1997, the development program, which began in 1981 and lasted into the 1990s, cost some $25.3 billion. In today’s terms, that’s over $38 billion. The Air Force is proposing to pay well less than half that for its next big plane.

It’s also worth noting that while no one is really quite sure what the three variants of the F-35 will ultimately cost to develop, the estimate is for at least $56 billion, without any further overruns. That’s almost four times as much as the proposed budget for developing a much bigger plane.

Now let’s tackle those procurement prices. According to the GAO, buying each B-2A cost an average of $737 million, or $1,107 million in today’s terms. But that “flyaway cost” omitted initial spares and software support, with which the price would have come to $929 million per aircraft, or $1,396 million in today’s terms. Fairly, in 1995, Northrop offered to sell another 20 to the USAF at just $556 million each, but that still would amount to $896 million each today.

So whether we’re talking $900 million or $1.3 billion or somewhere in between, we are definitely looking at a lot more than $550 million. And why wouldn’t we be? If an Airbus jumbo sells for $400 million, how could slightly more buy a big stealth bomber? It’s just not a plausible assertion. Frankly, as I wrote once before, the whole thing sounds like the tactics of former Mayor Willy Brown, who wrote this past July in the San Francisco Chronicle that

In the world of civic projects, the first budget is really just a downpayment. If people knew the real cost from the start, nothing would ever get approved. The idea is to get going. Start digging a hole and make it so big, there’s no alternative to coming up with the money to fill it in.

In that context, not approving the project starts to look pretty enticing.