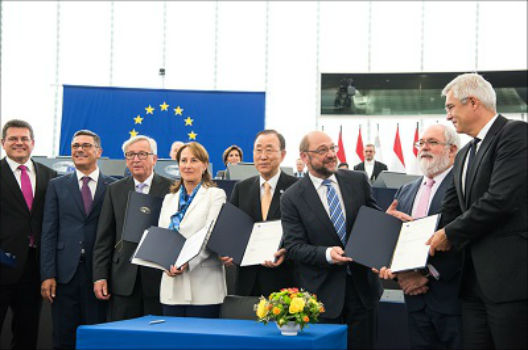 The European Council joined MEPs in approving a fast-track deal to ratify the Paris Climate Agreement as a single bloc on October 4, setting the stage for Climate Action and Energy Commissioner Miguel Arias Canete to deliver the official document to the UN on October 7. The accords can only come into force once 55 countries comprising at least 55 percent of total global emissions sign, and the EU ratification now pushes this over the required threshold. The treaty mandates a 30 day period once this quota has been met, meaning that the accords will take effect on November 6th, just one day ahead of a summit for key signatories in Morocco.

On October 2, Hungary held a referendum on the EU migrant quota mandating the resettlement of just over 1,000 refugees from other overburdened member states. Orban, who strongly campaigned against the quota, claimed a victory of 92 percent. However, the National Election Committee declared the referendum void due to only 40 percent of votes being valid. Claiming the referendum was not legally binding, Hungarian PM Viktor Orban said he would still make a constitutional change on his refugee policy. Critics have warned this could impact Hungary’s position in Brussels, and Sweden has threatened to sue over refugee asylum refusals.


Deutsche Bank edges closer to settlement with US

On October 3, Deutsche Bank announced that it was closing in on a settlement deal with the US Department of Justice over a potential 14 billion USD fine for the bank’s misrepresentation of mortgage securities prior to the 2008 financial crisis. The fine, which caused stocks in Deutsche Bank to fall to historic lows in recent weeks as investors began to doubt the stability of the bank, will reportedly be closer to USD 5.4billion after forthcoming negotiations. German economy minister Sigmar Gabriel criticized the bank for blaming speculators for the plunge in share prices, saying the bank had “made speculation its business.”

Reuters: Deutsche Bank shares slip again in race to reach US settlement
Business Insider: German economy minister attacks Deutsche Bank: ‘I did not know if I should laugh or cry’

EU offers new aid package to Syria
The EU responded to the worsening situation in Syria following a break in US-Russia ceasefire negotiations with an emergency aid plan. The plan, aimed at the besieged city of Aleppo, includes provisions for  food, water, and basic needs as well as medical evacuation plans from the city, and includes a 25 million EUR aid package for first response and humanitarian help.