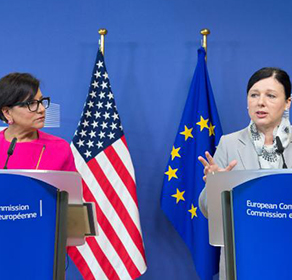 Privacy Shield to run for a year without legal challenge

EU data privacy regulators have agreed not to challenge the new Privacy Shield deal in courts for a year. Regulators want to wait until the first joint annual review sometime next summer to determine the effectiveness of privacy safeguards under the new agreement and identify any necessary changes. EU watchdogs are still requesting reassurances from the US that it will keep its commitment to refrain from mass surveillance. But the announcement is a huge victory for the deal and should reassure businesses, which can begin signing on August 1.

Rough time ahead for EU-Turkey relations

EU leaders have been outspoken in their criticisms of Turkey’s post-coup purges. In an interview on July 25, Commission President Jean Claude Juncker stated that Turkey is no position to become an EU member and that all negotiations will stop immediately upon reinstatement of the death penalty. That same day, Turkish President Recep Tayyip Erdogan accused the EU of not keeping its financial promises under the current migration deal and claimed that European governments “are not honest.” The Commission rejected Erdogan’s claims, saying the agreed upon sum had been allocated. The spat is likely the beginning of further deterioration of relations with Turkey following the failed military coup.

Commission and Paramount agree to concessions in anti-trust probe

The EU Commission has accepted concessions on behalf of Paramount Pictures in an anti-trust investigation into 6 major US film studios and pay-tv broadcaster Sky UK. The Commission filed formal charges last July over illegal licensing agreements that prevented consumers from accessing channels in countries outside of the UK and Ireland, otherwise known as geoblocking. Paramount made binding commitments to change clauses in those contracts. The investigation will continue for the other studios and is seen as part of a broader effort to create a single market for digital services in the EU.