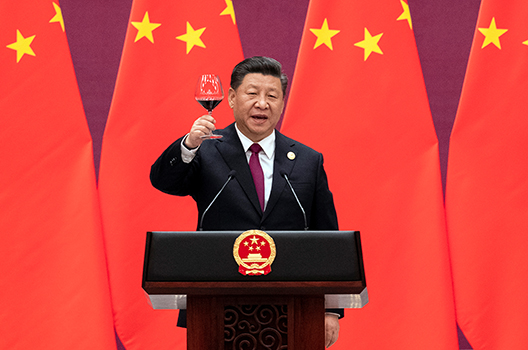 Chinese leader Xi Jinping’s ambition by now is clear: to reclaim his country’s global greatness and establish itself over time as the pre-eminent economic and political power, not only in Asia but across the world stage.

His most significant platform to achieve that has been the Belt and Road Initiative, which since it was launched in 2013 has resulted in cooperation agreements with 125 countries and 29 international organizations and estimated planned investments at more than $1 trillion.

This past week provided insight into something any American president of the past few decades could have told him. World leadership is complicated. It comes with increased costs, responsibilities and scrutiny from partners who, in Beijing’s case, question whether China’s historic rise will contribute to a better world – or just a more powerful and autocratic China.

In apparent response to both international and domestic criticism, President Xi yesterday (Friday) converted his previous hubris into a greater humility, speaking before 37 global leaders and more than 5,000 delegates at the second Belt and Road Forum in Beijing.

“Everything should be done in a transparent way, and we should have a zero tolerance for corruption,” Xi told the crowd. The speech at several points seemed to be responding to growing international denunciation of BRI’s lack of transparency, its inattention to corruption, it’s overwhelming favoritism toward Chinese entities, and its reputation as a “debt trap” for developing countries.

His shift in tone was also positive proof that Chinese leaders, and perhaps Xi himself, have belatedly recognized the need to respond to growing grumbling, both at home and abroad, about Beijing’s increasing authoritarianism, its growing international assertiveness, and its perceived arrogance when confronted with criticism.

Among China’s actions that have stirred the most concern have been Xi’s decision to lift constitutional term-limits on himself, his reclamation and militarization in the South China Sea, and a high-tech, high-profile offensive behind the motto “Made in China 2025” that has helped make China a global leader in next generation technologies but raises worries about the potential purpose of that primacy.

Former Australian Prime Minister Kevin Rudd, always one of the keenest observers of China, perceives what he calls a “policy refresh in the implementation of the Belt and Road Initiative so that it becomes less of an international political target in the future.” He sees a greater “internationalization of the BRI by welcoming investments from all countries” both to dull criticism of China and lessen Beijing’s financial exposure.

Still, don’t mistake Xi’s recalibration for retreat. Instead, China’s friends see in Xi’s Friday speech an ability to alter tactics in the face of new obstacles. Privately, Chinese elites still see the arc of history bending in their direction – though they worry that Xi’s new assertiveness has stirred up unneeded opposition.

With the second Belt and Road Forum ending, it’s worth reflecting on what’s now driving Chinese momentum and what remain the greatest obstacles to Xi’s ambitions.

China’s most important gains toward global leadership in the past couple of years haven’t been on the trade, economic or military fronts, but in his country’s all-out effort to win the commanding heights of next generation technologies. Where China has focused its greatest attention has been in fifth generation telecommunications (connectivity), artificial intelligence and quantum computing.

Rudd argues that China finds “additional strength” in the “continued absence of an American grand strategy of its own in the post-Soviet era.  While China has been surprised by the U.S.-China trade war initiated by Trump, they are confident it will soon find its resolution.”

China has found unanticipated help for its own rise. This includes Brexit and growing strains within the European Union, transatlantic trade tensions with Trump’s Washington, the US abandonment of the Trans-Pacific Partnership, the lack of a grand US global strategy after the Soviet Union’s collapse,  and the absence of any true Western global development answer to BRI.

The challenges China faces, however, are also considerable.

Economically, Rudd argues, Xi faced a dangerous slowdown last year as a result not only of the U.S.-Chinese trade war. It was even more a result of how he reasserted the Communist party’s control over the workings of the private sector. By imposing strict foreign exchange controls, tightening monetary policy, limiting the ability of private firms to operate internationally and favoring state-owned firms in the rationing of credit, he triggered a troubling slowdown of private investment and growth.

“With the private economy now representing 60% of Chinese GDP,” says Rudd, “Xi Jinping faces a continuing structural challenge to balance his natural instincts favoring Party control, with an increasingly restive private sector which increasingly resents its economic future being muzzled by a re-imposition of Party orthodoxies from the past.”

Perhaps the greatest uncertainty for Beijing’s leadership is how – and with what impact — the United States will respond to China’s rise, once it has closed its trade deal, now expected by mid-June.

Will it go into a more active model of containment or even pushback, as some in the Trump administration and national security hawks in the Pentagon and intelligence community would prefer?

At the very least, the United States needs to compete harder, and do more to galvanize friends and allies in common cause. That’s particularly true, write the authors of a newly released study, in the infrastructure realm where the world will need $94 trillion in investments by 2040.

Through the BRI, argues a report of the CSIS’ Global Infrastructure Task Force, China has made “the most significant and ambitious strategic initiative of the twenty-first century so far.”

“Over the next 15 years, more hard infrastructure is projected to be built around the world than currently exists,” argues the task force paper, co-chaired by Charlene Barshefsky and Stephen Hadley. “Make no mistake. The United States is way behind the power curve. Incremental improvements will not do.”

That seems to be the most important message. With China operating in ways that are anything but incremental, the United States response is inadequately focused, creative or resourced. China has significant problems to overcome, but thus far it lacks significant competition.

Image: Chinese President Xi Jinping raises his glass and proposes a toast at the end of his speech during the welcome banquet, after the welcome ceremony of leaders attending the Belt and Road Forum at the Great Hall of the People in Beijing, China, April 26, 2019. (Nicolas Asfour/Pool via REUTERS)