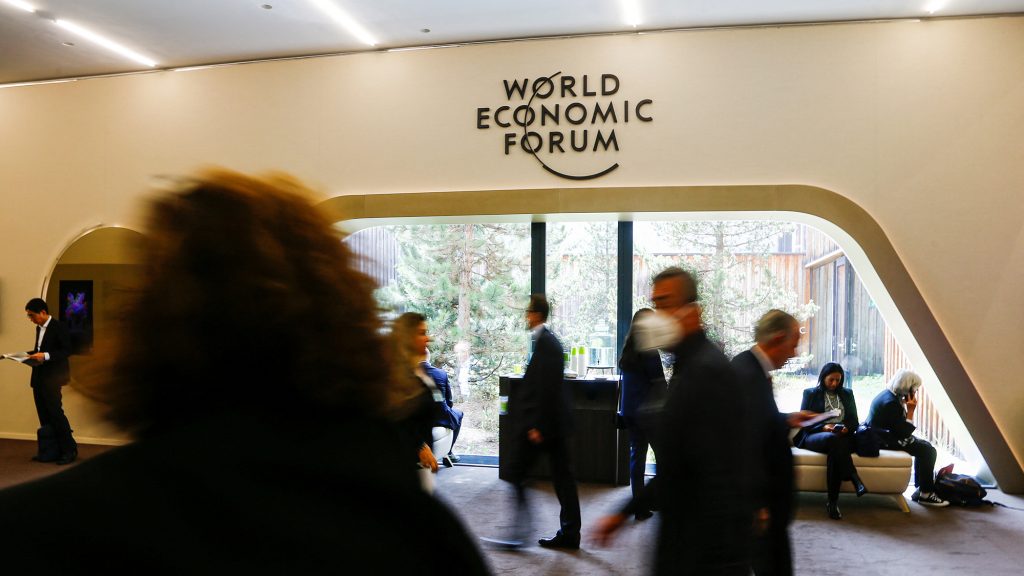 A hedge fund investor told me she attends the World Economic Forum (WEF) in Davos, Switzerland each year “so that I’ll know what to short.” In a world awash with geopolitical and economic pessimism—the dominant mood at this year’s Davos—her argument is that it might be time to go “long” on optimism.

One can quibble with her premise that Davos is a place more for conventional wisdom than investable solutions. As the world’s leading convener of global and business elites for most of the past half century, the WEF often has been ahead in identifying trends, including the Fourth Industrial Revolution, and in generating positive change, such as chief executive officers’ increased focus on social responsibility.

That said, there’s no doubt that this year’s prevailing theme was a collective gloom without ready solutions. One of Europe’s most murderous conflicts since World War II grinds on without resolution; the global economy continues to slide toward recession with slowing growth and growing inflation; and COVID-19, with all its variants, persists into its third year, with a particular pounding of China and related supply chains.

Yet there was another narrative on display in Davos as well.

Russian President Vladimir Putin has jolted the collective West from its slumber. Europe has responded with more collective purpose, and its taxpayers are funding weapons for a Ukraine fighting for shared freedoms. Even Davos’s newest elites, the cryptocurrency crowd, are exploring ways to deploy aid more effectively and swiftly to Ukraine even as they lick their wounds from billions in losses from the Terra crypto collapse.

That Davos for the first time took Russians off its invite list underscored that there are some crimes the global community must oppose.

“In Davos, our solidarity is foremost with the people suffering from the atrocities of this war,” said Klaus Schwab, the WEF’s founder and executive chairman. The WEF called for a “Marshall Plan” for the reconstruction of Ukraine, and Ukrainian President Volodymyr Zelenskyy told the Davos crowd via video that it should use seized Russian assets to help accomplish that task.

Not present was Chinese President Xi Jinping, who has used the Davos stage to preen as champion for a better world, most recently on January 17 this year when he spoke to a virtual WEF session.

“We need to discard Cold War mentality and seek peaceful coexistence and win-win outcomes,” he said, just a matter of days before he signed a joint statement with Putin agreeing to a relationship “without limits.” That, in turn, was a little more than a month before Putin launched his war.

One wonders whether Xi ever tried to convince Putin of what he told his January Davos audience: “History has proved time and again that confrontation does not solve problems; it only invites catastrophic consequences.”

The week’s most repeated story was that of how Ukrainian business leader and philanthropist Victor Pinchuk (an Atlantic Council International Advisory Board member) transformed the perennial “Russia House” into “Russian War Crimes House.”

“Russia for years came here to Davos to present itself in the way it believed it should show itself to the world,” exhibition curator Bjorn Geldhof told CNBC’s Silvia Amaro. “We are representing war crimes that Russia is committing in Ukraine, but war crimes that were also committed in Chechnya, that were committed in Syria—so what we are showing is the reality from Russia that most people don’t speak about.”

For all these reasons and more, I am going “short” on pessimism and “long” on optimism as I return to Washington, DC this weekend. I’m acting less due to any conviction about a positive outcome than I am because of the costs to us all if we don’t leverage this moment for a common cause.

I’m wagering that the hope and heroism Ukrainians have demonstrated will overwhelm the complacency that has weakened global democracies for much of the past three decades. I’m betting that the resolve to help the Ukrainians win will expand and outlast signs of fatigue as Russia makes gains in eastern Ukraine.

As Delaware Senator Christopher Coons told the Washington Post’s Ishaan Tharoor in Davos: “I think it’s fairly obvious that the Russian plan is to grind it out…and to count on the West to come apart in some way and frankly to lose interest and be distracted by high energy costs and our own elections.”

I’m also wishing, against previous experience, that following this week’s school shooting in Uvalde, Texas, resulting in twenty-one deaths, the United States can address its domestic ills even as it rallies the world to help Ukraine defeat Putin. One draws hope from the new $40 billion aid package for Ukraine that Washington’s toxic partisanship isn’t irreparable.

One can only see hope in Sweden and Finland’s applications to join NATO, ending a two-hundred-year history of Swedish neutrality, not to threaten Putin but rather to better unify the transatlantic community against a generational threat. I’m betting that NATO can overcome Turkish President Recep Tayyip Erdoğan’s objections.

US President Joe Biden’s trip this week to Asia was also encouraging, in that it introduced a new economic plan to advance relations with his partners and abandoned the outdated concept of “strategic ambiguity” toward Taiwan, not to make war but to prevent it.

It was US Secretary of State Antony Blinken’s speech at George Washington University on Thursday that captured the link between Putin’s war and China’s challenge.

“Beijing’s defense of President Putin’s war to erase Ukraine’s sovereignty and secure a sphere of influence in Europe should raise alarm bells for all of us who call the Indo-Pacific region home,” he said, later adding “we cannot rely on Beijing to change its trajectory. So we will shape the strategic environment around Beijing to advance our vision for an open, inclusive international system.”

That’s an outcome worth investing in.

Don’t miss Friedman’s column—one of his best and most powerful—written after a lunch with Biden at the White House. The fact that it was off the record doesn’t mean you won’t learn, as Friedman put it, “what I ate and how I felt after.”

“What I felt afterward was this,” he wrote. “For all you knuckleheads on Fox who say that Biden can’t put two sentences together, here’s a news flash: He just put NATO together, Europe together, and the whole Western alliance together—stretching from Canada up to Finland and all the way to Japan—to help Ukraine protect its fledgling democracy from Vladimir Putin’s fascist assault.”

And yet, Friedman fears that despite being able to rally US allies, Biden has failed to unite Americans. “I am talking about our ability to transfer power peacefully and legitimately, an ability we have demonstrated since our founding,” he explains. “The peaceful, legitimate transfer of power is the keystone of American democracy. Break it, and none of our institutions will work for long, and we will be thrust into political and financial chaos.” Read more →

Brands offers this smart look in Foreign Affairs at how Biden can modify his strategy to bring more countries into the fold and shore up US relationships.

Brands would like Biden to amend his divisive language of “autocracy versus democracy” that separates the world in ways that are imprecise and inaccurate. The fact is that there are democracies that haven’t joined the pressures on Putin, and there are autocracies that the United States needs and don’t embody the “combination of tyranny, power, and hostility” of Russia.

“The United States isn’t opposed to all autocracies, and not all democracies are on its side,” writes Brands. That means, Brands argues, that Biden must better articulate the coalition he aims to rally to better achieve success. Read more →

“Despite their constant pledges of ‘peaceful development,’” writes Schuman, “China’s leaders have scared many of the country’s neighbors. New Delhi, historically no fan of Washington, has felt threatened by Chinese hostility over disputed borders. Beijing’s intensifying intimidation of Taiwan—with Chinese jets buzzing dangerously close to the island—has alarmed the region. Politicians in Canberra and Seoul have certainly not forgotten the economic coercion Beijing employed against them to compel changes in their policy. China’s bullying in the South China Sea has irked those with competing maritime claims.”

The bottom line: Biden’s trip to Asia, marked by his comments on the defense of Taiwan and announcements of a proposed new regional trade pact, not only demonstrated the persistence of US global power but also underscored “Beijing’s failure to translate economic might into political dominance, even in its own backyard.” Read more →

For months, the Atlantic Council’s foresight experts have been projecting how the war could break out and, once it did, how it could unfold next.

In this latest installment, Burrows and Manning revisit their April forecasts considering the conflict’s trajectory since then. Their three possible scenarios are worth reading: Ukraine is slowly strangled, Russia makes no gains, and Ukraine wins back nearly everything.

“What happens next on the battlefield will determine whether the current largely frozen conflict will eventually advantage Russia or Ukraine,” they write. “Various military outcomes are still plausible. With so many variables in play, it is difficult to attach probabilities to potential scenarios.” Read more →

There will be a time when historians will review Zelenskyy’s rich collection of speeches and statements to understand how this unique leader rose to the challenge of Putin’s invasion of Ukraine.

His address to the World Economic Forum has been one of his strongest, where he seized upon the theme of the Davos gathering: “History at a turning point: government policies and business strategies.”

“This is really the moment when it is decided whether brute force will rule the world,” Zelenskyy told his audience, following their standing ovation. “If it reigns, our thoughts won’t matter to it. And we may no longer convene in Davos. Because what for?”

It was a tough message, telling those gathered that the war would not have happened if they had responded more resolutely after Russia started its war in Ukraine in 2014. That was a bad precedent that had to be corrected through unity of purpose.

“So, now we can do it differently,” he concluded. “Finally in the right way.” Read more →

Image: People walking past the World Economic Forum (WEF) logo during the forum in Davos, Switzerland May 23, 2022. Photo via REUTERS/Arnd Wiegmann.