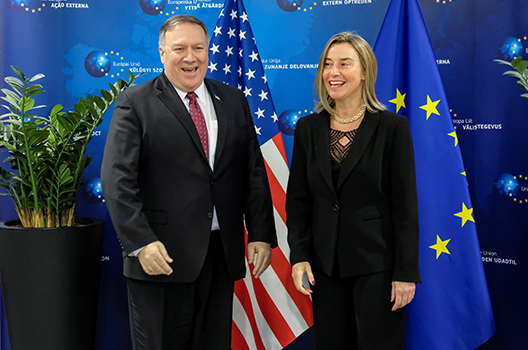 MUNICH – The United States has traditionally reassured doubtful allies of its security commitment through such measures as troop reinforcements and military exercises.

This weekend, the U.S. will forward deploy more than 40 members of Congress – including House Speaker Nancy Pelosi – to the Munich Security Conference, the biggest such U.S. delegation in the 55-year history of the group, the most significant transatlantic powwow of its kind.

At a watershed moment for Western cohesion, the suggested subtext is unmistakable:

Don’t be misled by media reports or Trumpian tweets that suggest the U.S. will weaken or even withdraw from NATO, history’s most enduring and effective alliance. We as representatives of American voters will ensure that we safeguard the transatlantic bonds that have helped produce one of the most prosperous and secure periods of human history.

That’s reassuring, of course, but only for the short term. U.S. legislators have already done much to legislatively ring-fence the president on NATO on the alliance’s 70th anniversary. And President Trump’s comparatively positive statement on the alliance in his State of the Union suggests he may have decided to back off threats and instead take credit for many NATO members’ recent increases in military spending.

After all, he’s got bigger fish to fry: his summit in Vietnam with North Korean leader Kim Jong Un on February 27-28 and a possible meeting soon as well with Chinese President Xi Jinping. He also faces growing concerns at home with the Mueller probe reportedly winding down and Democratic investigations ramping up. NATO may be the beneficiary of limited presidential bandwidth.

So, the greater peril in Munich is that the U.S. and its allies, by focusing so much on preventing worst-case outcomes over the past couple of years, haven’t prepared for the future. At a time that requires a renewed sense of cohesion and purpose on both sides of the Atlantic, they’re hamstrung by ongoing Brexit dramas, transatlantic trade tensions, disagreements on issues ranging from Iran to Russian gas, and a rising tide of nationalist and populist forces.

If transatlantic leaders don’t begin now to remind themselves of their common interests and again join in common cause, they’ll find that the construct of “the West” – that did so much to shape the last century of history – will lose its ability to shape the future.

The transatlantic future is as much an economic as a security question. The North American-European economy still is the largest and most prosperous economic bloc in the world, accounting for a more than third of global GDP (India and China combined account for just 25 percent). The U.S. and Europe account for 64 percent of global outbound foreign direct investment and 51 percent of global personal consumption. Transatlantic coherence also means more combined weight to counteract authoritarian state-owned enterprises and the ability to counter rules that less democratic countries might set on a whole host of global economic rules and practices.

Yet the challenges are mounting. China is increasing its global assertiveness and presence in Europe. Russia is continuing its offensive on Ukraine, as well as its efforts to disrupt Western democracies and its military modernization, including next-generation nuclear-capable missiles. Then there’s a Fourth Industrial Revolution of technological change that may favor authoritarians and make democratic politics all the more volatile through lost jobs and uncertain futures.

And that just scratches the surface.

I’ve argued frequently that our historic moment is similar in importance to the periods after World Wars I and II, where leadership decisions held outsized and generational importance. That has prompted the Atlantic Council, alongside its Canadian partners at the Centre for International Governance Innovation, to produce a “Declaration of Principles for Freedom, Prosperity and Peace,” which will be released at the MSC on Saturday.

It declares the right of all people to live in free, just, democratic and safe societies. It affirms the right to free markets, equal opportunity and a healthy planet. More provocatively, it assures rights of national sovereignty, but with a caveat: it grants a “right of assistance” to support non-violent groups and individuals to foster democracy or human rights in non-free societies.

It closes with a call for collective action to advance these principles. In short, it’s a call to arms for the attendees of the Munich Security Conference – and far, far beyond.

“Free nations must adapt and change,” the Declaration of Principles declares. “Yet our principles remain sound because they reflect the common aspirations of the human spirit. Societies that respect these principles are better placed to produce security and prosperity. Nations that uphold them are more likely to work together in peace. And authoritarians who stifle enterprise, dispense arbitrary justice and abuse their people ultimately will fail.”

In an era of mush, the language is muscular.

“We will defend our values,” it says, “overcome past failures with new ideas, answer lies with truth, confront aggression with strength, and go forward with the confidence that our principles will prevail.”

The context here in Munich is a less lofty one.

Media reports that President Trump considered withdrawing the United States from NATO, and his skepticism more generally toward Europe’s value as a partner, have generated a flurry of doubts about the U.S. security guarantee – fostering a cottage industry of wrong-headed experts promoting what they call European “strategic autonomy.”

European calls for autonomy and U.S. ambivalence toward transatlantic security are two sides of the same bad coin. Nordic European countries and the most threatened Central and East European states recognize that while greater European military strength and unity is required, it may never be enough to protect them.

What both parties in Congress are saying, by their impressive presence here and through recent legislative activity, is that they are recommitting themselves to their European allies.

The House of Representatives did it through passing the NATO support act, with 357 votes in favor and only 22 against , expressing support for NATO and bars the use federal funds to withdraw from the alliance.

Just this week, a bipartisan group of senators, including South Carolina Republican Lindsey Graham, who leads the delegation here, and New Jersey’s Bob Menendez, introduced a bill that would impose stiff sanctions on Russian corporations, its cyber industry and some of Putin’s associates as well as require a two-thirds majority in the Senate for the U.S. to withdraw from NATO. It comes atop sanctions the U.S. imposed on Russian entities and individuals in 2018 over Russia’s election interference, annexation of Crimea and the Skripal attack.

With so many great minds and actors in place here, one can only hope that they won’t stop merely at damage control but go beyond that by laying the foundation for ambitious efforts to define a new era of freedom and prosperity – just as the founders of NATO did seven decades ago.