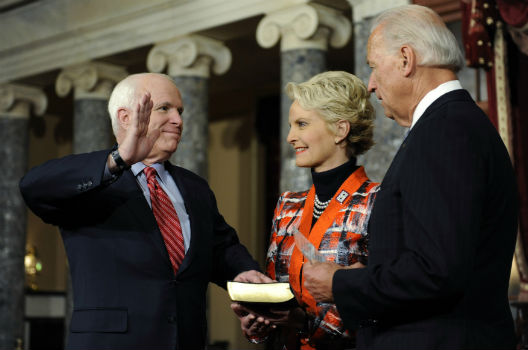 History will recall this week’s passing of Senator John McCain, freedom fighter and democracy defender, as either the passing of an era or the rekindling of American purpose.

McCain himself would humorously dismiss much of the lionizing of his life’s contributions in the few days since his passing, culminating in this weekend’s memorial service at the Washington National Cathedral. Yet he would also concede there’s dramatic timing to his death, coinciding as it does with new threats to US global leadership and the principles for which it should stand: democratic rule, protection of individual rights and equal justice before law.

McCain in his last years witnessed new dangers emerge from within Western democracies from self-centered populism, nationalism and protectionism. He saw the perils grow externally from authoritarianism, extremism and terrorism. Most of all, Senator McCain understood that the cancer of US political polarization and self-centered myopia was as hazardous in a larger sense as brain cancer had been to him personally.

At a time when Americans are questioning their global purpose, when the threat of major power conflict has returned, when rapid technological change has introduced new economic uncertainties, and when the future of the post-World War II global system itself is in question, what Senator McCain understood most was the urgent necessity of principled US leadership.

In that spirit, he wrote his own parting message to the American people. Thomas O. Melia compared it to the baseball player Lou Gehrig’s famous farewell before passing from his eponymous disease in 1941, Abraham Lincoln’s Gettysburg address of 1863 or, going back even further, Pericles funeral oration in 430 B.C.E., after the first year of the Peloponnesian War.

Wrote McCain, “I owe it to America to be connected to America’s causes: Liberty, equal justice, and respect for the dignity of all people brings happiness more sublime than life’s fleeting pleasures. Our identities and sense of worth were not circumscribed but are enlarged by serving good causes bigger than ourselves.”

The enduring nature of such values, and consistent threats over the centuries to their survival, is captured in Thucydides recounting of Pericles oration, the most famous speech in antiquity which Melia notes had articulated “the ideas of democratic citizenship that distinguished Athens from its neighbors and rivals.”

Pericles notes Athens weaknesses and “present difficulties,” and expresses magnanimity toward those who don’t share Athens’ ideals. “We throw open our city to the world,” he says, “and never by alien acts exclude foreigners from any opportunity of learning or observing, although the eyes of an enemy may occasionally profit by our liberality.”

Most inspiring to mere mortals in the McCain story is the authenticity of this great man of considerable flaws and failures, of legendary humor but also frequent temper.

He showed remarkable courage as a prisoner of war in North Vietnam, where he refused to abandon his fellow POWs. He also stood behind President George W. Bush’s decision to surge troops in the Iraq War and then his presidential campaign imploded in the summer of 2007 due to conservative reaction toward his support for immigration reform.

At the same time, political courage escaped him when he failed to stand with those who called for the Confederate flag to be removed from the South Carolina state capitol or during his 2008 presidential race when he selected Alaska Governor Sarah Palin as his political running mate. He chose political expediency over his preference to run alongside his friend Senator Joe Lieberman, Democratic turned Independent, who he knew was better equipped for the Vice President’s office.

Common cause often brought us together, both when I worked at the Wall Street Journal and then later at the Atlantic Council. We shared a passion for NATO’s enduring purpose and its enlargement to embrace and provide security to new European democracies, and we shared a suspicion over Kremlin leader Vladimir Putin’s revanchist intentions and underlying ambitions.

When the Atlantic Council honored Senator McCain in 2011 with its Freedom Award in Poland, following a moving introduction by Estonian President Thomas Ilves, McCain said:

“There is always the temptation to see in the dreams of others for democracy all of the particular reasons why their struggles are different from ours…But if I leave you with one thought tonight, my friends, let it be this: It is our obligation, as free peoples, to look beyond these divisions. To disregard all the arguments that counsel passivity in the fight for human dignity, and to reaffirm that core idea united us all, and: solidarity with the universal longings of the human soul, for basic rights and equality, for liberty under the law, for tolerance and opportunity.”

Of the many voices saluting McCain this week, the Atlantic Council’s own John Raidt – who knew the Senator for 36 years and staffed him for 16 – best articulated McCain’s “rules for living” in a must-read reflection published by Politico Magazine.

Among them: duty first, respect the democratic process, protect the minority, engage the opposition, take risks, clean up the role of money in politics, honor the office, curate freedom’s comparative advantage, recognize that America’s economic and military power are products of its values and ideals, lead from the front, gain peace through strength, show candor with allies and adversaries, modernize strategies and alliances and know your history.

It’s a long list of “rules,” but the power of Senator McCain’s life grew out of the consistency by which he lived by them.

Raidt closes his piece by honing in on the McCain attribute that the Senator so often demonstrated, including in his final words, and that was gratitude “for the people, experiences and causes that have filled his meaningful life.”

McCain would be the first to say on this memorial weekend that the best way to signal gratitude for his own contributions would be not to view his passing as the end of an era but rather as a time for American renewal around the passion and purpose for the ideal to which he devoted his life.