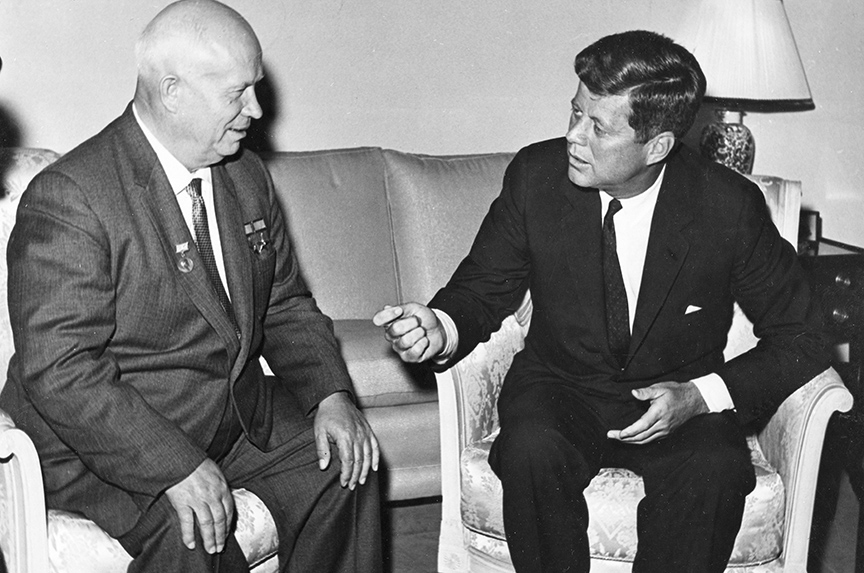 It was only a few minutes after his failed Vienna Summit with Soviet leader Nikita Khrushchev had ended, but US President John F. Kennedy already feared the worst. Khrushchev had outmaneuvered and brutalized him, and Kennedy worried that he had left an impression of weakness that his adversary would exploit.

In a darkened room and behind closed blinds, a scene designed to conceal the meeting from other reporters, Kennedy sunk into a sofa and candidly answered a simply put question from the New York Times’ James “Scotty” Reston: “How was it?”

“Worst thing in my life,” Kennedy said. “He savaged me.”

The Soviet leader violently attacked him on American imperialism—and turned particularly aggressive on Berlin. “I’ve got two problems,” Kennedy said. “First, to figure out why he did it, and in such a hostile way. And second, to figure out what we can do about it… If he thinks I’m inexperienced and have no guts, until we remove those ideas we won’t get anywhere with him. We have to act.”

History has disturbing lessons about the potential consequences of this week’s confounding Helsinki Summit of US President Donald Trump and Russia’s Vladimir Putin. For that reason, it’s worth reflecting on Kennedy’s own experience of Vienna, recounted in my book Berlin 1961: Kennedy, Khrushchev and the World’s Most Dangerous Place.

Less than two months after Vienna, the Soviet leader presided over the construction of what would become the Berlin Wall, with Kennedy’s acquiescence. It would divide the free and unfree worlds for nearly three decades thereafter. Two months after that, Soviet and US tanks faced off in a nail-biter at Checkpoint Charlie. And a year after that, the two nuclear powers came close to war over the Cuban Missile Crisis. All were indirect but indisputable outcomes of that Vienna Summit.

It may be months or even years before the world knows what the Helsinki Summit has wrought, but such meetings always have consequences, often unintended. Sound analysis remains impossible, even for the most senior US officials, lacking any reliable read-out from the two leaders’ two-hour private meeting. So, one can only speculate about what may have been said or suggested on issues of historic consequence: on US commitment to NATO treaty obligations, on Ukraine’s sovereignty and continued sanctions against Russia, on nuclear arms matters, on Syria’s future and Iran’s role.

The answers are crucial. Even more significant may be how the Russian leader takes the measure of Trump and thus interprets his room for maneuver following Helsinki. It’s worth recalling that Russia’s invasion of Crimea came only four days after its 2014 Winter Olympics in Sochi. With his March reelection, a successful soccer World Cup, and now the Trump meeting behind him, Putin will be sizing up how best to build on his unfolding legacy of restoring Russia’s power and prestige—while destabilizing and weakening Western democracies.

President Trump left little time this week to digest Helsinki before he had shifted the narrative yet again. Once he edited his Helsinki press conference remarks to counteract charges that he trusted Putin more than his own intelligence services, he issued an invitation to Putin for a second summit this fall in Washington, DC.

By week’s end, he had also criticized the Federal Reserve for raising interest rates and taken additional trade swipes at the European Union and China ahead of next week’s visit to Washington of European Commission President Jean-Claude Juncker. This all in a week when the European Union reached the largest bilateral trade deal in history with Japan and advanced talks with China in no small part to counteract President Trump’s tariff threats.

What makes all this ongoing drama all the more consequential is that it comes at a time when the future of the rules-based order, the set of institutions and practices established by the US and its allies after World War II, is already in growing question. Meanwhile, democracies are struggling, autocracies are surging, a new era of major power competition is unfolding, and the US role in the world is the most unsettled it has been since World War II.

All that makes this week’s must-read all the more compelling, FT reporter Edward Luce’s long lunch with Henry Kissinger, the Atlantic Council’s longest serving board member. Though the 95-year-old strategist resisted Luce’s many efforts to draw him out on President Trump, he was ready to say, “I think Trump might may be one of those figures who appears from time to time to mark the end of an era and to force it to give up its old pretenses. It doesn’t necessarily mean he is considering any great alternative. It could just be an accident.”

Luce challenges him, wondering whether Kissinger is trying to say that “there is a nontrivial chance that Trump could accidentally scare us into reinventing the rules-based order that we used to take for granted.”

Replies Kissinger, “I think we are in a very, very grave period for the world.”