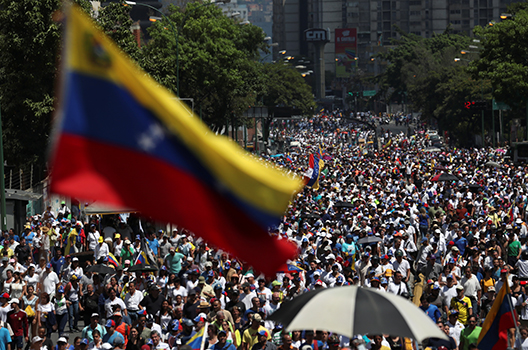 The first major showdown of our new era of great power competition, unfolding with accelerating speed over the past ten weeks in Venezuela, has entered a dangerous new phase. That is true, most of all, for the Venezuelan people, but also for Latin American democracies and for vital US interests in the Western Hemisphere.

How this drama turns out may mark the most significant test yet of the Trump administration’s credibility, following a highest-level chorus this week of President Donald Trump, Secretary of State Mike Pompeo and National Security Advisor John Bolton, who all declared – in one way or another – that Russia had to get out of the country.

Vice President Mike Pence ratcheted up the pressure further on Friday, announcing at a speech in Houston with new sanctions on the state-owned oil company PDVSA as well as two additional companies that transport Venezuelan crude to Cuba. Pence, who will address the UN Security Council next week on Venezuela, also said the US would increase its pressure on Cuba.

What raised the stakes was Russia’s well-publicized and provocative move on March 23 to land two planes with some 100 soldiers in Caracas. The ostensible reason for their arrival was to service Venezuela’s Russian-made S-300 air defense systems, which are said to have been damaged in recent energy blackouts. Other Russian military contractors and mercenaries are already believed to be providing security support for the Maduro regime.

That was accompanied by this week’s decision of Maduro’s puppet National Constituent Assembly to strip interim President Juan Guaidó of his immunity. Guaidó assumed power under a constitutional provision which stipulates that in the absence of a legitimately elected President, the President of the National Assembly takes up presidential powers on an interim basis. That raises the possibility, perhaps as early as this weekend, that the Maduro regime could arrest and imprison Guaidó – with widespread, anti-Maduro and pro-democracy protests expected for Saturday.

What concerns US officials is that Vladimir Putin may be laying the ground for making Venezuela the defining foreign policy debacle for President Trump in the same way Syria became that for the Obama administration. Indeed, this week the Maduro and Assad regimes showcased their solidarity in Damascus, where Maduro Foreign Minister Jorge Arreaza met with the Syrian leader. “The two Syrian and Venezuelan peoples’ fight against U.S. conspiracies and imperialism and the two will emerge victorious,” Arreaza said.

Though there is a great deal that differentiates Venezuela and Syria, what connects them is considerable: a weakened dictator, who would be much more likely to fall without Moscow’s support, a U.S. declared red-line that the Kremlin finds unconvincing, and a chance for Putin to shore up his global reputation at the expense of Washington –this time in the Western Hemisphere.

White House National Security Adviser John Bolton laid down a tough line, with echoes of the 1823 Monroe Doctrine, with his warning to Moscow: “We strongly caution actors external to the Western Hemisphere against deploying military assets to Venezuela, or elsewhere in the Hemisphere, with the intent of establishing or expanding military operations. We will consider such provocative actions as a direct threat to international peace and security in the region.”

Exactly one month ago, I wrote in this space, “As the country with the world’s largest proven oil reserves and one of its greatest humanitarian disasters, Venezuela is a place whose destiny in any case would have had outsized consequences for Latin American and global energy markets. Given the involvement of the U.S. and its democratic allies on the one side and China, Russia and Cuba on the other, the stakes are even higher geopolitically.”

As is so often the case in the Trump administration, there is also a personal element for a president who has refrained from the tough language toward Putin and Russia employed by the top US officials around him. Writes David Sanger in the New York Times, “Would Venezuela be the place where Mr. Trump, who has often seemed willing to tolerate Mr. Putin’s most audacious provocations, finally draws his own red line? And if so, does he have a plan to enforce it?”

Putin is betting big that Trump has neither the will nor the plan.

It was by coincidence that the situation around Venezuela was heating up even as the NATO alliance marked its 70th anniversary in Washington, DC, this week. Amid the celebration, however, experts raised new questions over whether the alliance was sufficiently equipped for the long period of strategic geopolitical competition that likely stands before us.

“NATO is the most successful Alliance in history because we have always been able to change as the world changes,” NATO Secretary General Jens Stoltenberg said before a Joint Session of Congress, the first time any leader of a multilateral organization has been invited to give such an address.

Yet if the consensus is right that the 21st century’s great challenge would be a competition between democratic and authoritarian countries and systems, and in particular China and Russia, then Russia is making the next play in our hemisphere, and NATO is already behind the curve.

“…the United States should lead a more concerted effort to thicken the political bonds and operational ties between NATO and its global partners,” said the Atlantic Council’s Damon Wilson in testimony before a subcommittee of the House Foreign Affairs Committee. “Specifically, the United States should consider formalizing the links among US treaty allies in Europe and those in Asia, namely Japan, South Korea, Australia and New Zealand. At the same time, we should begin fostering alliance-like links among our existing allies with strategic partners such as India and, in Latin America, Colombia, Brazil and Mexico.”

He sees all that as a possible precursor “to a more formal alliance among democracies who are committed to protecting their way of life and a democratic international order.”

There are plenty of reasons to think such ambitions are fanciful when President Trump remains ambivalent about the value of alliances, NATO’s European members are so divided on how to manage relations with China and when only a minority of Europe’s NATO members have risen to their promised defense spending obligations.

Yet NATO has learned over the years that the alternative to changing when the world changes is irrelevance – and a world whose guiding rules and principles would no longer be shaped by democracies. Venezuela may be the right place to catalyze deeper links among the United States, Canada, key European allies and leading democracies of Latin America.