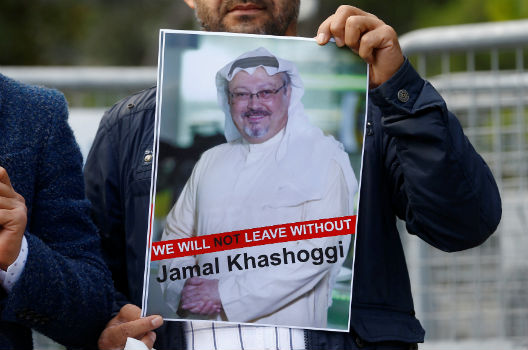 For many months, Trump administration officials have worried privately that Saudi Arabia’s young prince Mohammed Bin Salman – in whom President Donald Trump and his son-in-law Jared Kushner had invested so much – was through rash actions endangering his own historic project of a more religiously moderate, socially open and economically diverse Saudi Arabia.

Yet these officials had held fire and damped their public criticism, as had many other Saudi friends including me, because of what seemed the larger prize. MBS, as the 33-year-old Saudi crown prince is known, could act impulsively, emotionally and repressively, but the larger, strategic stakes of his efforts to transform his country were of historic and global significance.

By his own admission, the crown prince was an autocratic representative of an ancient monarchy, but he had in his cross-hairs the austere Saudi Arabia that had emerged in the years after the Grand Mosque seizure by militants in 1979. It was a worthy target as it had become the midwife and financer of an extreme and puritanical vision of Islam that seeded the 9/11 terrorist attacks, killing some 3,000, and al-Qaeda, ISIS and much more.

That was the larger context when Saudi journalist Jamal Khashoggi disappeared 10 days ago. Reports now are more convincing, in addition to being more persuasive and gruesome, that he was murdered by Saudi agents. So, it soon may be time to mourn even more than the tragic and grisly passing of this intelligent, honorable and principled individual, whom I had known for years as a fellow journalist.

It may also mark the death of the crown prince’s best ambitions, if not handled far more decisively and transparently than has been the case thus far.

The crown prince had been confronting three existential strategic threats simultaneously. A yet-incomplete internal struggle over his leadership, a dysfunctional domestic economy and culture that requires wholesale change, and an immediate external threat from an aggressive and expansive Iran. The country, the region and the world would be better off if MBS succeeds on all three.

But his recent mistakes have been the best gift possible for his domestic rivals, for those who fight his reform agenda and for Iran.

What’s at risk is a Saudi shift that had geopolitical, geo-economic and, most of all, geo-religious consequences. Given those stakes, President Trump has been understandably reluctant to condemn his Saudi partners, but he missed the primary danger with his concerns about the $110 billion US defense sales, a few more billion in Saudi investments in the United States, and the US jobs they may spawn.

The religious and cultural stakes are far more significant. That’s because the Saudi turn after 1979, along with the Iranian revolution of the same year, altered the course of history by setting back the modernization efforts that previously were blossoming across the region.

Saudi Arabia’s well-financed proselytizing, mosque-building and religious school creating around the world had a force unlike all others because it came from the birthplace of the Prophet Muhammed, and the home of the religion’s two holiest places, Mecca and Medina. Muslims listened and opened their doors when Saudi imams arrived in their countries and communities toting generous checkbooks – and pushing an anti-modernist, intolerant agenda.

Because of this Saudi global influence, it was hard not to be seduced by MBS’ vision of a more modern and moderate Islam. He had defanged the religious police, he gave women the right to drive, he opened movie theaters, he had promised far more help in the global fight against terror, and one assumed that this positive trajectory would continue.

At the same time, however, in recent weeks his Saudi government locked up Saudi female driving activists, it broke relations with Canada in a pique of anger over tweets calling for the release of two imprisoned rights activists, and it acted time and again to douse dissent.

I count myself as one of those who had been captivated by the possibility of change and the compelling MBS personality. What impressed me was his focus, energy and vision, laid out over three lengthy meetings in Riyadh and Washington, of how his country had gone wrong and what he would do to modernize it with next-generation support.

Our meetings were off-record, but his on-record statements echoed their central tenets. Perhaps most powerful was his speech just a year ago at the country’s first Future Investment Initiative, where he laid out before global investors why his vision for the country more closely matched what the Prophet had intended.

“Saudi was not like this before 1979,” he told more than 2,500 leading business figures from more than 60 countries. “Saudi Arabia and the entire region went through a reversal after 1979. All we are doing is going back to what we were: a moderate Islam that is open to all religious and to the world and to all traditions and people.”

Just 11 days later, he launched his anti-corruption campaign by detaining a passel of princes and a herd of former ministers and Saudi businessmen in the Riyahd’s lavish Ritz Carlton. I engaged with young Saudis who embraced his determination to root out corruption in Saudi Arabia’s vast system of royal patronage, but he at the same time was consolidating power.

That unrivalled power now has made him the central figure to watch in the Khashoggi case, and it has been his silence thus far as the country’s ultimate figure of authority that has been most disturbing to those who had hoped the initial reports of official Saudi complicity were untrue.

Coming shortly before the second annual Future Investment Initiative on October 23-25 in Saudi Arabia, the Khashoggi affair is also providing a test of international support for MBS when investor unease was already growing.

Saudi Arabia suffered a capital flight of some $80 billion in 2017 and another $65 billion projected this year, according to research by JP Morgan. Inward investment has also collapsed. In 2017, new foreign direct investment fell to a 14-year low. Since 2016, FDI has dropped by more than 80 percent to $1.4 billion – so the government target attracting $18.7 billion by 2020 is near impossible.

So many speakers and media partners for this year’s initiative have already pulled out that the organizers have pulled down the names from the on-line agenda.

Those who have kept their bookings keep watching for any news from the Saudis – a security video from the consulate to clarify what happened to Kashoggi, a clarifying statement by the Crown Prince himself, anything that would alter the growing conviction of Saudi complicity.

Without that, much more than the Future Investment Initiative is in danger.

Conventional wisdom not long ago was that Crown Prince Mohammed bin Salman would rise to the throne and serve for decades, helping to transform his country, the region and the future of Islam for the better. Though he may still achieve that, his success in doing so now rests heavily on how quickly, decisively and transparently he can manage the current crisis and learn from his mistakes.

“Jamal Khashoggi lost control of his fate when he entered the Saudi consulate in Istanbul,” wrote Elliot Abrams in a Washington Post op-ed. “Mohammed bin Salman must act quickly to regain control of his own.”