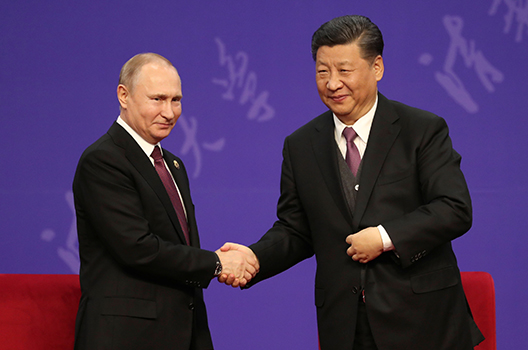 It’s time to start worrying more about what could become the most profound geopolitical shift of the post-Cold War years. China’s Xi Jinping and Russia’s Vladimir Putin are deepening their two countries’ strategic alignment even as long-time democratic allies across the Atlantic grow more distant.

Some are going so far as to call it an autocratic alliance. Though it hasn’t been (and likely won’t be) sanctified by treaty, the Trump administration’s escalated pressures on Beijing and continued sanctions on Russia have helped drive the two sides more closely together than at any point since the 1950s.

That truth will be on full display next week when President Xi pays a state visit to Russia, their second meeting this year and their 29th since 2013. Xi will attend and speak at the St. Petersburg International Economic Forum, and he’ll accept an honorary degree from Saint Petersburg State University.

More significant is the underlying Xi-Putin bromance that’s spawning a flurry of economic and diplomatic deals even as US-China trade talks run aground. At a press conference this week, Vice Foreign Minister Zhang Hanhui said the two sides are likely to sign joint communiques that will take relations to a new level, following a 24.5 % growth in trade in 2018 to a record $108 billion.

Zhang, reflecting Beijing’s increased bluntness toward Washington, said the two sides will deal with “outside challenges” and protect each other’s security and development. “We firmly oppose the willful use [of] sticks of tariff and protectionism,” he said. “Deliberately provoking trade disputes is economic terrorism, economic hegemony and economic chauvinism.”

For now, what binds them together is common cause against US global leadership, their shared interest in political survival, their similarly autocratic systems and the personal closeness that has grown between leaders who have acted to concentrate more power in their own hands.

Conventional wisdom has been that the distrust and historic animosities that divide China and Russia are so profound – and the economic and military asymmetries are so great — that any concerns about a potential alliance that threatens US interests are overdone.

“The conventional wisdom no longer applies,” write experts Andrea Kendall-Taylor and David Shullman in Foreign Affairs. They argue that the depth of relations between Beijing and Moscow already far exceeds earlier expectations and that “the two countries acting in concert could inflict significant damage on U.S. interests even if they never form an alliance.”

For now, what binds them together is common cause against US global leadership, their shared interest in political survival, their similarly autocratic systems and the personal closeness that has grown between leaders who have acted to concentrate more power in their own hands. The result is closer cooperation across areas from space navigation and technological development to global diplomacy and intelligence gathering.

Thus, it’s time for Western leaders to abandon their wait-and-see attitude toward the evolution of Chinese-Russian relations and work out common strategies now to respond to this deepening relationship, counteract its dangers where they arise and provide incentives to both parties not to further align themselves against Western interests.

“The alliance, if it becomes concrete, would overturn how we do global politics,” writes Bruno Maçães, the former Portuguese Europe Minister, in Politico. “Imagine an international crisis in which Russia and China suddenly emerge as a single bloc…Psychologically, in the mind of the West, it would combine the fear associated with Russia with the apparent invulnerability of China. Washington would feel under attack, Europe, intimidated and unsettled.”

Adds Maçães: “It would be an entirely new world, and it’s one that is coming closer to becoming reality.”

What previously had put the brakes on deeper Chinese-Russian relations was a combination of Beijing’s reluctance to distance itself too much from Washington and Russia’s concerns about being overwhelmed, particularly in economic terms, as the junior partner in the relationship.

Growing acceptance in Beijing that it is now locked with the US in a decades-long global contest has reduced Chinese resistance to closer relations and increased the attention to exploring areas of common interest. Beyond that, Beijing values Russian military technology and diplomatic sway, even as it accepts Moscow’s economic and structural weaknesses.

Deeper foreign policy alignment between Russia and China would be felt on issues from the Arctic to the Middle East, and from North Korea to Venezuela.

Should the United States and more than 50 countries aligned with it fail to coax Venezuelan dictator Nicolas Maduro from power, look no further than Russia and China acting increasingly in common purpose with other autocrats to defend their economic interests and prevent Washington from achieving its aims to promote democratic change, even in its own hemisphere.

In a further sign of Sino-Russian common cause to undermine US global credibility, the Russian Foreign Ministry this week rejected participation in next month’s US-sponsored Middle East peace summit in Bahrain, which is aimed at getting Palestinians to accept territorial concessions in exchange for economic incentives. That came immediately after Chinese Ambassador to Palestine Guo Wei announced that Beijing and Moscow had agreed to boycott it.

What’s striking is Moscow’s rapidly growing acceptance of its role as junior partner in a relationship where not so long ago it was the lead. Russia’s economy was larger than that of China as recently as 1990, and throughout the Cold War it was Moscow that led the Communist world. Now, however, the Chinese economy is eight times larger than that of Russia. With its annual growth rates north of 6% and Russia’s of less than 2%, the gap is widening.

Putin underscored his realization of China’s economic superiority in April in Beijing at the Belt and Road Forum, where he enthusiastically embraced the Chinese initiative despite its challenges to Russian leadership in Central Asia and elsewhere.

Putin said, as he received his own honorary degree in China at Tsinghua University, “witnessed by my good friend President Xi Jinping,” that “I hope that the students will study hard and inherit the friendship between Russia and China to build a beautiful tomorrow of the Russia-China relations.”

The Trump administration’s national security strategy focuses heavily on a new era of major power competition. What it doesn’t address is how the United States should respond if its two primary rivals join in a more resolute common cause against it – and play the game with a vigor, focus and strategic purpose that Washington hasn’t matched.