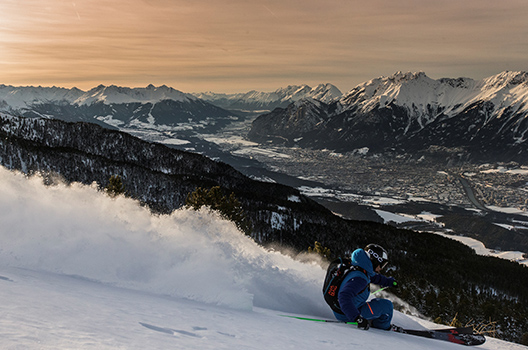 A skier is pictured in front of the Inntal valley in Tulfes, January 24, 2018. (REUTERS/Dominic Ebenbichler)

Fresh back in DC from a Colorado ski vacation, it strikes me that the treacherous year ahead that we confront – littered with political, economic and security risks – presents all the challenges of a double black diamond ski run.

Such slopes are signposted as such to warn skiers of an approaching terrain that is steeper, narrower, and bumpier than all but the most expert skiers can navigate, made even more unpredictable by frequent weather changes. Their bone-rattling obstacles are seen (trees) and unseen (snow-covered boulders).

That’s a good metaphor for a year during which volatility may be the only certainty for policy makers, business leaders and investors.  That may be good news for the ilk of hedge funds that are designed to capitalize from price swings, and thus this could be a bumper year for them. For most of the rest of us, expect months of handwringing and headaches.

The first few days of 2019 have already set the tone.

Stock markets have sunk and soared in the first days of trading, falling on growing fears of a global slowdown and the economic hit of US-Chinese trade tensions, only to rise again on good US job numbers or encouraging Trump tweets. Yet risks lurk behind every global corner.

Will the Trump growth story turn belly up in the face of domestic turbulence: the Mueller investigation, the threat of impeachment and Fed interest rate policy? Will the United Kingdom crash out of the European Union or remain through a “people’s vote”? Will the US-China trade fight end in a deal or escalate into something worse? Does US troop withdrawal from Syria signal a less predictable US ally? And so on.

The list of risks is a growing one. A good many experts have already provided their “top ten” for 2019. Rather than add my own, here instead are five historic inflection points to watch, a handful of history-bending shifts this column will track in the months ahead.

1. THE SHIFT FROM US-CHINESE ENGAGEMENT TO STRATEGIC COMPETITION

The most significant geopolitical shift of the past year has been the ending of an era of expanding U.S.-Chinese cooperation and its replacement by a period of competition. In 2019, this will play out in economic, military and technological domains.

Presidents Trump and Xi may well reach a trade truce by the end-March deadline, as it is in both sides’ interest. However, markets nevertheless will have to price in what Robert D. Kaplan in Foreign Policy calls a China-US cold war that “is becoming the negative organizing principle of geopolitics.”

On both sides, leaders are bracing for a generational contest that could shape our times, one that requires steady hands and sturdy alliances.

Market jitters in the first few days of 2019 underscore increased worries about a global economic slowdown, but the larger risks are structural and long-lasting.

“The outlook for the global economy has darkened,” writes the World Bank in its newly released Global Economic Prospects. “Downside risks have become more acute and include the possibility of disorderly financial market movements and an escalation of trade disputes.

Yet most experts still believe 2019 will only produce the sort of mild, cyclical slowdown that the world occasionally requires. Inflation remains subdued, real interest rates remain low, and US equities are attractively priced.

Scarier are the structural shifts that lurk behind this correction, driven by technological change. Inequality will continue to grow, manufacturing employment will decline, and nationalist and populist politics could increase further.

Martin Wolf writes in the Financial Times of “an erosion of the liberal global economic order.”

3. THE FADING OF AMERICAN PRIMACY

Travel abroad, however, and the short-term question allies and adversaries ask is about Trump administration predictability. Their longer-term concern is that Trump may be a symptom and not the cause of a retreat from bearing the burden of global responsibility and cooperative leadership alongside allies.

It can be a confusing picture.

Mideast leaders privately say President Trump’s abrupt decision to withdraw US troops from Syria, without consulting them, shook their confidence in US predictability. At the same time, Secretary of State Mike Pompeo in Cairo heartened allies this week with his pledge that the US would not retreat until ISIS is defeated and Iran countered.

“We learned that when America retreats, chaos often follows. When we neglect our friends, resentment builds. And when we partner with enemies, they advance.”

In this 70th anniversary year of NATO, the world’s most successful and enduring alliance, will the US take actions around the world to build upon the alliances that shaped the post-World War II global system. Or will they erode—along with US primacy?

The coming year will underscore the limits of European integration.

A combination of European Union parliamentary elections in May, the weakening of French and German centrist leaders, and the continued rise of a European nationalist right will bring what Fredrik Erixon in the Spectator calls “the year of peak federalism. An era of never closer union may be about to begin.”

Europe’s populists are gaining traction as a lasting force in European politics. They are not a coherent force, but as they gain more power they are coalescing in a more common purpose that doesn’t oppose EU membership but seeks more national autonomy.

The Brexit drama will also play out this year. The possibilities range from the economic shock of a no deal exit to a “people’s vote” to remain, with generational consequences.

This will be a year to watch just how far strongmen dare to extend their gains, given the erosion of global rules to constrain them and the retreat of the world’s policeman in Washington that long predates Trump.

Watch Mr. Putin’s actions in Ukraine, in the wake of Russian incursions in the Sea of Azov, and amid falling popularity at home, as Kiev faces crucial presidential elections in March. Also track Chinese President Xi Jinping as he tackles an economic slowdown with a mixture of economic and nationalist stimulus.

“The wind is in the sails of strongmen worldwide,” writes Robert Malley, the President and CEO of the International Crisis Group, in a Foreign Policy review of 2019 trouble spots.

The greatest risk of 2019 might be that of strongmen miscalculating as they test limits.

Back in Colorado a few days ago, our ten-year-old daughter Johanna exulted at the bottom of a mogul-strewn black diamond run. “That was so empowering!” she said, speaking to a camera. “My ankles are killing me, but it was worth it.”

Double-black diamond years can shape history, for better or worse.
Set your bindings to expert – and Happy New Year!