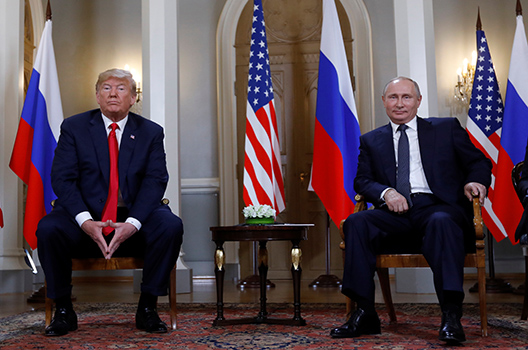 What we learned from President Trump’s performance at the NATO Summit this week, the first scenes of a European three act play ending in Helsinki with Vladimir Putin on Monday, was that the American leader will go to great lengths to control the narrative.

Right down to last-minute plot shifts.

It’s in that context that one best understands the power of Special Counsel Robert Mueller’s script-altering announcement Friday of new indictments of a dozen Russian intelligence operatives on charges of hacking Democratic organizations and ensuring the pilfered files become public. That brought appeals that Trump should cancel his Putin meeting, which he won’t, but it does set the stage in more dramatic manner.

However, let’s return first to Act I in Brussels.

Before the NATO summit, hand-wringers despaired that Trump would divide, disrupt and perhaps even destroy history’s most enduring alliance, based on his pre-summit bluster. Hopeful voices within the administration countered that he could “pivot to the positive” from his ally-dissing moments of the recent G7 meeting in Canada, where he tweeted from Air Force One upon lifting off his refusal to sign off on the joint communique.

They argued Trump could take a “victory lap,” based on NATO’s achievements and summit “deliverables,” captured in an impressive 79-paragraph declaration (not called a communique to avoid a G7 redux). These included increased defense spending among all allies over the past four years; two new commands, intensified anti-terrorist commitments in Iraq and Afghanistan, and common purpose to counter Russian aggression.

In the end, dramaturgist Trump confounded both the hand-wringers and the hopefuls. Never has a NATO Summit simultaneously produced so much good news and such bad blood. Improvising his own script, President Trump indeed closed the two-day summit with a victory lap, but not before a sharp detour where he threatened that the US would “go it alone” if NATO allies didn’t pony up their defense spending commitments far faster.

NATO Secretary General Jens Stoltenberg considered the moment serious enough to call an emergency session of the 29 allied leaders. Depending on your point of view, what followed was either a refreshingly open exchange among national leaders that ultimately produced unity of purpose. Or it was a narrowly escaped alliance collapse.

At an impromptu press conference that followed, with his European allies heading for their planes without media interaction, President Trump said, “And now we’re very happy and have a very, very powerful, very, very strong NATO, much stronger than it was two days ago.” And then he tweeted from Air Force One en route to the UK: “Thank you @Nato2018!”

History will record whether President Trump in Brussels did more to rally NATO or divide it. He does seem to have extracted commitments among allies to more intensively work at achieving their defense commitments faster. At the same time, increased acrimony among leaders and nations could poison the trust upon which an alliance is based.

There was little time to digest the NATO Summit’s outcomes before President Trump opened Act II in the United Kingdom, where he again rewrote the script to inject more drama into what might have been an uneventful meeting with Prime Minister Theresa May in a week when it would have proved difficult to upstage her unfolding government crisis.

Yet Trump achieved just that. He did it first through his interview with Rupert Murdoch’s Sun newspaper, which produced screaming headlines across the London press. He said, and it was recorded, that May had “wrecked” her negotiations with Brussels and had produced a “soft Brexit” plan that ultimately would “kill” any chance at a new UK-US trade deal.

By day’s end he said the report was “fake news,” showered praise on Prime Minister May, and said whatever course she sought with the EU was “okay with me.” Though cutting a trade deal would be “tricky,” he said, “this is an incredible opportunity for both our countries and we should seize it.”

After a brief intermission at his Scottish golf course, Trump will return for Act III on Monday in Helsinki.

Trump’s penchant for designing dramatic plot lines will run up not only against the impact of the Mueller indictments. He also will face a Russian leader with a penchant himself for controlling the narrative. On matters from arms control and sanctions to Syria and Ukraine, watch this space.

The only matter that’s certain is the potential for surprise.