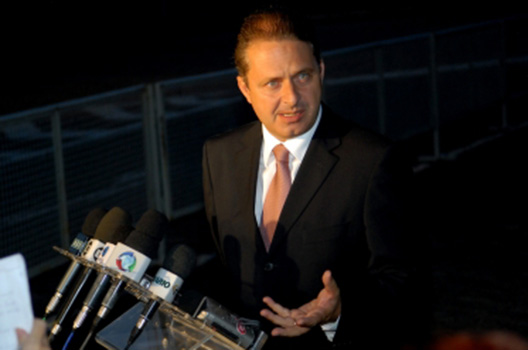 Wednesday, the 13th of August, became a day of sudden and unexpected mourning for Brazil as a small private jet plane carrying presidential candidate Eduardo Campos crashed in the coastal city of Santos killing everyone on board. Campos’ death dramatically changes the Brazilian election’s dynamic. Though polls had him in third place with President Dilma Rousseff and Gov. Aecio Neves ahead, the loss of Campos is more afflicting because it represents the loss of one of Brazil’s most promising young political figures. At forty-nine years old, Campos was only just revealing himself to the larger mass of the Brazilian public. His death came just one day after he had given a nationally viewed televised interview on Globo TV’s Jornal Nacional, Brazil’s most watched television show.

This incursion into the presidential elections represented the hope of the locally adored Campos to transfer that popularity into the national sphere. Heir to a storied family political tradition, Campos became governor of his home state of Pernambuco following the footsteps of his Grandfather and three times Governor of Pernambuco, Miguel Arraes. After seven years of governorship, Campos left office with approval ratings of over 70 percent. He was reelected as governor with more the 80 percent of valid votes, making him the most popular governor in Brazil at the time.

Campos portrayed himself as a leftist politician, although he held conservative views in several social matters. As Minister of Science and Technology, he passed an influential program that allowed for the use of embryonic stem cells and trans-genetics in research. Serving as an influential minister for President Lula da Silva’s cabinet proved fundamental in later being elected as governor of Pernambuco and in attaining the presidency of his party.

Given his remarkable career and great potential, his death comes as a great loss to Brazil. “The whole of Brazil is mourning. Today we lost a great Brazilian,” said President Rousseff in the wake of the tragedy. Rousseff declared a state of national mourning and Neves suspended campaigning on Wednesday out of respect for the loss of Campos.

The tragedy now completely changes the dynamic of the election: the death of Campos now adds a great degree of uncertainty to the race. His running mate, Marina Silva, is set to replace him although she has not yet confirmed. A popular alternative, Silva ran in the 2010 presidential elections and came in third place with 19 percent of the votes. An environmentalist and evangelical Christian who grew up in the amazon tapping rubber trees, she is a hugely popular figure who draws support from a very wide spectrum of voters including Brazil’s large evangelical population.

Recent polls peg Silva at an impressive 47 percent of the voting intention compared to Rousseff’s 43 percent, in the case that the election goes to a second round. First round poll figures put Silva in a technical tie with fellow candidate Aecio Neves: they command 21 percent and 20 percent of the voting intention, respectively. With 36 percent of the voting intention in the first round, President Rousseff is significantly ahead of her challengers, but still well below the percent of the votes she needs to ensure victory in the first round. It is presently uncertain whether Silva’s imppressive polling numbers are enjoying a short term surge due to the overwhelming sympathy of Brazilian citizens following the death of Campos or whether the numbers are a good indicator of her longterm support. It thus remains to be seen whether Silva will be able to capitalize on these votes and seal that support all the way to the October elections if she decides to run.

The next few months of campaigning will decide whether Silva can garner enough support to put herself ahead of Neves and continue to convince voters. The possibility of her running has been met with optimism, as reflected in Brazilian financial markets. The Sao Paulo stock exchange gauge has risen as much as 1.1 percent in recent days. This rise reflects market speculation that declining support for Rousseff would result in the revitalization of economic growth by  a new administration.

Such optimism, however, is largely overshadowed by the great senseless tragedy that Campos’ death represents for Brazil. Wednesday saw the country lose a leader of great promise.