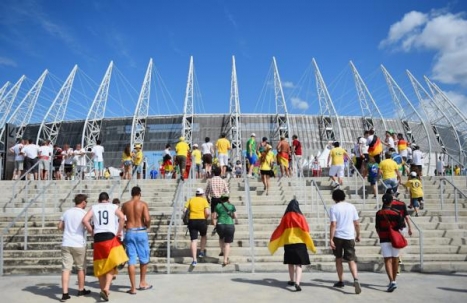 In the run-up to the FIFA World Cup, Brazil had to endure a spate of negative reporting and doomsday-style predictions about its capacity to deliver a successful tournament.  Moreover, articles on perceived failures in the preparation for the event stretched the pessimism even further, to the point of questioning the World Cup legacy in the long-run and even the Brazilian standing in world affairs. From that perspective, an event that was supposed to showcase Brazil’s rise on the global stage would actually tarnish its image and spoil its influence.

This dark cloud of pessimism and heavy criticism quickly dissipated as soon as the ball started to roll in the Brazilian stadiums.  Once the Cup was over, a new and more accurate consensus emerged: the World Cup in Brazil was a great success.  According to a poll conducted right after the World Cup ended, more than 60 percent of journalists said that Brazil’s image improved with the event.  Most of them agreed that the World Cup in Brazil was probably the best ever in history.

In fact, despite the negative mood that prevailed in certain circles in Brazil, which was uncritically replicated by think tanks and the media in the United States, the success did not come as a surprise to those observers with deep knowledge of the country.  The stadiums were ready and always close to full; the main airports received new terminals and provided good services for passengers; the flights ran on time; urban mobility projects in several cities contributed to shorten the time spent in traffic; no major security incidents occurred; and tourists enjoyed the hospitality of the Brazilian people and the festive atmosphere that engulfed the country.

Why then the pessimism in the first place? Nothing in Brazil is self-evident and simple. Brazil is not for beginners, as Tom Jobim used to say. Brazil is a developing country facing many challenges. And it is also a vibrant democracy, with a strong civil society and active grass-roots organizations. Brazil has undergone deep changes over the last two decades or so, with millions entering the middle class and demanding more and better access to health care, housing, education, and transport.  This combination of a new middle class, political awareness, democracy, and the need to improve services explain the protests that swept the country last year.

The negative reporting and the exaggerated pessimism can only be attributed to misinterpretation of Brazil’s complex reality, in which immense economic and social progress coexist with formidable challenges.

This is why any signs of difficulty in the preparation provoked heightened anxiety. Protests that were less important and on a much smaller scale than last year’s unleashed concerns that turned out to be totally far-fetched.  Reports of cost overruns were considered final proof of wrongdoing and corruption, although Brazilian authorities dismantled a scheme of illegal ticket sales and the price tag of stadium was on average lower than similar arenas in Europa and Asia.  Stadiums in host cities with over two million inhabitants were referred to as white elephants in the middle of nowhere.  Urban mobility projects running behind schedule were depicted as abandoned projects. And the list could go on.

In stark contrast to the unfounded criticisms, the final balance of the World Cup in Brazil was far from being negative. Brazil was the subject not only of reports framed in sophisticated language that nonetheless missed the point, but also of inane or outright prejudiced manifestations, such as the piece entitled “Brazil is totally screwed,” which appeared in June 2014 in the pages of the otherwise respectful Foreign Policy magazine.

Despite all the hastened and harsh judgment passed on the country, the legacy of the World Cup was undeniably positive, both in its material and symbolic dimensions. Our patience has paid off, as the consensus on the successful staging of the World Cup demonstrates.

As far as the material dimension is concerned, the Brazilian people will continue to benefit from the modernization of ports and airports, roads, highways, and other critical infrastructure; the multi-use arenas are luring more fans to Brazilian national and local leagues matches; the experience in organizing the World Cup provided invaluable lessons for our law-enforcement agencies and for coordination among local, state and federal authorities; the global spotlight on Brazil, its cultural diversity, and its varied and stunning landscapes during the event will continue to have a positive impact on the flow of tourists into the country.

As a matter of fact, the principal legacy of the World Cup might prove to be less palpable, but no less important: Brazil’s growing soft power.  In spite of the national team’s performance in the semi-finals, Brazil projected far and wide the image of a large, democratic, and peaceful developing country that, even though still facing many challenges, has accomplished a great deal in the areas of social and economic development. This is a powerful example to inspire others.  We are a country whose achievements are underpinned by the openness, joy, tolerance, and warmth of its great people, as everyone was able to witness during the games.  I believe this is the most enduring World Cup legacy for my country.

Although this time Brazil has not lifted the trophy, Brazilian society as a whole was the clear winner off the soccer field.  Our passion for the beautiful game is only surpassed by our openness to the world, a distinctive trait of our national soul that is now better appreciated all over the globe.

H.E. Mauro Vieira is the current Ambassador of Brazil to the United States