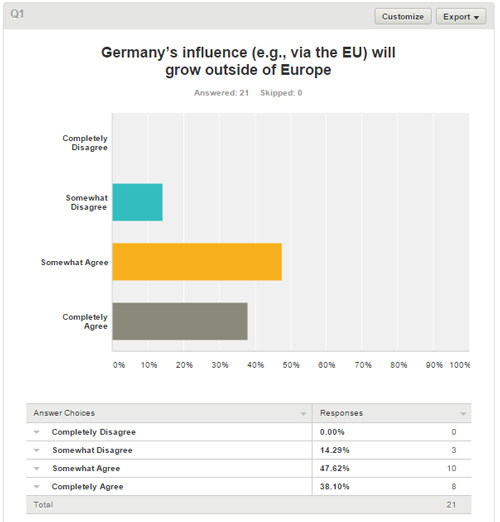 The US-German Next Generation Project, a project of the Atlantic Council’s Transatlantic Relations Program, aims to identify new voices from the US and Germany who will help launch a debate on how to strengthen the US-German relationship. The participants in the Network have engaged in a forum to identify the trends and architecture of this evolving relationship. Between March 22 and March 29, twenty-one members of the Network took part in a survey to gauge its assessment of US-German relations. This blog will attempt to analyze their responses from the survey as well as the general discussion that has been generated in the forum.

Deep historical ties produced the trans-Atlantic partnership. US and German relations extend into shared experiences, values, and interests. However, as the world becomes increasingly smaller, new global challenges are making Washington’s and Berlin’s foreign policy bigger. Washington has foreign policy priorities in the Middle East as well as the Asia Pacific. Meanwhile, Berlin is dealing with regional concerns: stabilizing the European Union, preserving the Eurozone, and calming the Ukrainian crisis. The Network has sought to evaluate where the bilateral relationship is heading. Are strategic interests for next generation of Americans and Germans is whether each country’s converging or diverging? And if it is the latter, will strains in the relationship prove long-term?

Overall, the Network holds a mostly positive outlook. The survey displayed consensus that ties between Washington and Berlin are strongest among economic interests. Over half of respondents believe it is the closest aspect of the relationship. An overwhelming majority of the Network marked that the Transatlantic Trade and Investment Partnership (TTIP) would strengthen the transatlantic relationship. The reinvigoration of transatlantic trade that the treaty promises is far from realized. As the transatlantic community waits for politicians to complete TTIP negotiations, the network displayed a vote of confidence that that the economic relationship between the US and Germany will grow over the next ten years.

Overall, respondents believe that political ties will grow over the next ten years. However, almost two-thirds of respondents do not believe that US and German politicians will prioritize the same interests/issues over that time. In other words, the two countries may face different electoral pressures, regional challenges, or political priorities. Still, the Network is confident that the two countries will generally improve their bilateral diplomacy. Regardless of political hurdles, the two countries possess deep bonds brought about by historic and cultural commonalities. This survey suggests that these commonalities will keep lawmakers in Washington and Berlin in close collaboration.

The next generation of Americans and Germans will confront a host of new global challenges. The previous era demonstrated that the US-German relationship could survive past the Cold War. The participants in the Atlantic Council’s Next Generation Project hope that the next era will witness a vitalized relationship- one that is prepared to address new trade opportunities, energy challenges, and stateless terrorism as a unified actor.