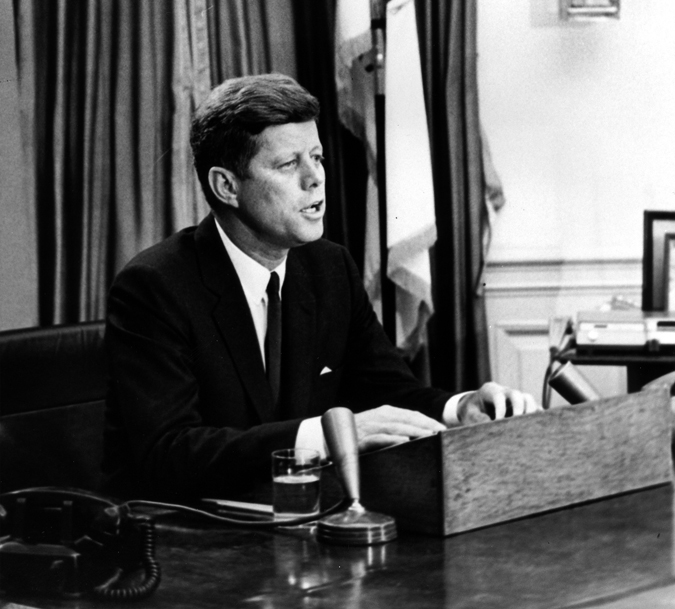 In the late afternoon, President Kennedy retreated to the Lincoln Bedroom to read through the latest draft of a speech he would deliver live at ten o’clock that evening to a national television audience. It was rare for any president to use the Oval Office for such a purpose, and workmen had been there all day, laying cables and wires.

Kennedy knew how high the stakes had become. At home, he had to reverse a growing impression of foreign policy weakness, which made him politically vulnerable. After mishandling Cuba and Vienna, he had to convince Khrushchev that he was willing to defend West Berlin even while he left the door open for negotiations.

The result was a speech whose rhetoric was far stronger than its underlying message.  If Khrushchev were looking for it, this was a timely signal to him that if he didn’t touch the access or freedom of West Berlin, he could do virtually anything he wanted on his own side of the Berlin border.  Coming less than three weeks before the historic Berlin border closure, that message may have been decisive.

“The immediate threat to free men is in West Berlin,” Kennedy said, using visual teaching aid of a map for the American people to show West Berlin an area of white floating 110 miles inside the black of Communist East Germany. He said West Berlin was “more than a showcase of liberty, a symbol, an island of freedom in a communist sea. It is even more than a link with the Free World, a beacon of hope behind the Iron Curtain, an escape hatch for refugees.”

Perspiring under the heat of the camera lights, the air conditioning having been shut off to avoid undue noise, Kennedy said, “West Berlin is all of that. But above all it has now become – as never before – the great testing place of Western courage and will, a focal point where our solemn commitments stretching back over the years since 1945, and Soviet ambitions now meet in basic confrontation.”

More striking, but entirely unnoticed by the media, was the  speech’s mention seventeen times of the qualifier “West” in front of Berlin when speaking of U.S. commitments, a departure from U.S. presidents’ ritual commitment to the freedom of the city as a whole.  Another paragraph recognized “the Soviet Union’s historical concerns about their security in Central and Eastern Europe, after a series of ravaging invasions, and we believe arrangements can be worked out which will help to meet those concerns …”

Just the previous day at lunch, James O’Donnell, a top official of the U.S. Information Agency and a Kennedy family friend, had complained to speechwriter Ted Sorensen at lunch about the emphasis on “West” Berlin in a final draft of the speech. He feared the Soviets would see the omission as a message that they now had a free hand in East Berlin, though the city technically still remained under four power rule. He also worried Kennedy’s language on eastern Europe would be interpreted as ceding forever to the Soviets the captive countries of Poland, Czechoslovakia and Hungary.

Sorenson argued to O’Donnell that the speech was merely recognizing reality.  Americans would be reluctant enough to accept a military buildup to safeguard two million West Berliners, which Kennedy would announce in the speech, but it would expect too much of Americans to risk their lives for the lot of a million East Berliners caught on the wrong side of history.

O’Donnell suggested an easy fix, simply omitting the word “West” in most of the places where it appeared before “Berlin.”