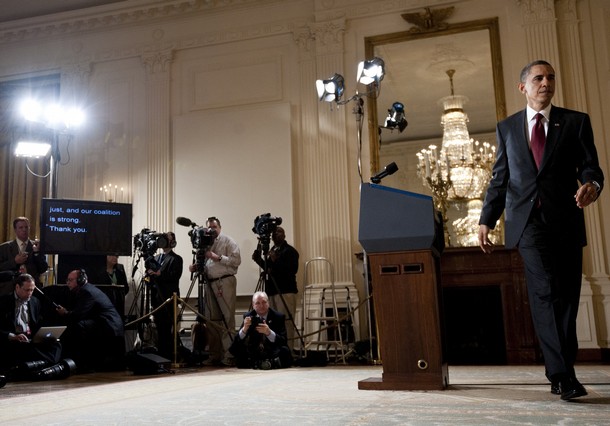 Georgian President Mikhail Saakashivili discussed the Libyan situation at an off-record dinner for the Atlantic Council’s Georgia Task Force late last week. Both for those who favor and oppose the West’s military intervention in Libya, Saakashvili serves as Exhibit Number One.

U.S. inaction in Libya, according to Saakashvili, would have raised far greater dangers for countries like his, where it is only the prospect of American support that keeps adversaries at bay.  If the U.S. and its friends hadn’t intervened in Libya, where the chance of victory was relatively good and the opposition weak, Russia’s leaders might reckon that President Obama wouldn’t lift a hand if Moscow tried to take another swipe at its least liked neighbor.

America’s strength serves as a more effective deterrent when coupled with American resolve—or backbone.  The surest way for the U.S. and its allies to avoid military action is for would-be rivals to be clear about U.S. global purpose,  commitments and willingness to stand by them. Looking beyond Russia, the Georgians also believe that U.S. failure to act in Libya would have encouraged the country at their other border, Iran, to even more assertively intervene to take advantage of Mideast turmoil.  Inaction, as well, would have been a sign to the Iranians that they could press forward their nuclear weapons ambitions without any serious threat of retribution.  Take the military option out of their calculations, and Iran loses much of the motivation for negotiation.

To prove his point, Saakashvili argues that Russia would have continued marching on to Tbilisi during his war with Moscow back in August 2008, were it not for President George W. Bush’s shift from a more neutral to a more supportive stance by flying in humanitarian relief in C-17 military transport planes.  It was a half hour after the President’s tough Rose Garden statement and the deployment of military assets (even if only for a humanitarian mission), the Georgian leader argues, that Russia’s military put on the brakes – realizing finally that Washington meant business.

Bullies on the international stage respond to perceived American weakness or lack of resolve with a more insatiable appetite, a point underscored in Kennedy’s early handling of Khrushchev as I document in my forthcoming book, Berlin 1961: Kennedy, Khrushchev and the Most Dangerous Place on Earth.

For those who oppose the Libyan action, however, nothing concentrates their arguments more than the Saakashvili example. In the world of Realpolitik, Georgia is a dangerous distraction.  Russia, whatever its human rights failures and unfriendly actions toward neighbors, is a big power that Washington needs for matters on the world stage ranging from the Afghan war to fighting extremism.  In a world of hard choices, they are ready to accept Russian occupation of South Ossetia and Abkhazia and move on.  The reset policy toward Russia, they argue, is already paying dividends.

Peggy Noonan in her weekly column has best captured the arguments of those who oppose our ongoing Libyan intervention.  (Also don’t miss her previous column last week on Don Rumsfeld’s book, one of the most brilliantly scathing book reviews I have ever read.  Her bottom line question: why didn’t he take more blame on himself for failing to kill or capture Osama bin Laden after 9/11).

Said Noonan, under the headline “You Can’t Go Home Again,”

The biggest takeaway, the biggest foreign policy fact, of the past decade is this: America has to be very careful where it goes in the world, because the minute it’s there—the minute there are boots on the ground, the minute we leave a footprint—there will spring up, immediately, 15 reasons America cannot leave. The next day there will be 30 reasons, and the day after that 45. They are often serious and legitimate reasons.

So we wind up in long, drawn-out struggles when we didn’t mean to, when it wasn’t the plan, or the hope, or the expectation.

Her irrefutable argument: it is easier to get into wars than to get out of them, for which there is plenty of proof in Afghanistan and Iraq, where the costs of withdrawal often seem greater than the enormous burdens in sticking it out.

Obama knew that as well when he made his decision to make the first new military intervention of his presidency, making Libya his war of choice, and that’s why he was so reluctant to intervene and has put strong caveats on American action.  Yet anyone who tracks these things realizes the U.S. will fail if the result isn’t a regime change – and one that doesn’t tie down American resources for years to come.

Presidential decisions at times like these are never easy. Whether this one is successful or not will depend on whether U.S. and allied strategy and execution prove to be as sound as the motivations for intervention.  And we may not know the answer for years, even if Gaddafi is swept from power quickly.

Fred Kempe is president and CEO of the Atlantic Council. His latest book, Berlin 1961, will be available May 10. Photo Credit: Getty Images.