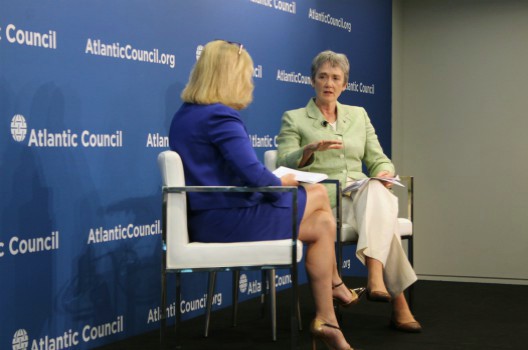 The Atlantic Council’s Scowcroft Center for Strategy and Security hosted US Secretary of the Air Force Dr. Heather A. Wilson on Tuesday, May 29 for a discussion on her top priorities, which include restoring readiness, cost-effectively modernizing, driving innovation, developing exceptional leaders, and strengthening alliances.

Scowcroft Center Senior Fellow, Ian Brzezinski, provided opening remarks, and Christine Wormuth, Director of the Atlantic Council’s Adrienne Arsht Center for Resilience and former Under Secretary of Defense for Policy at the US Department of Defense, moderated a follow-on discussion with Secretary Wilson.

In her prepared remarks, Secretary Wilson emphasized the growing importance of US allies in an increasingly complex and dangerous world. She explained that the Department of Defense’s new National Defense Strategy, published this past January, addresses this new era, transitioning the Air Force’s focus from the fight against violent extremism to the re-emergence of great power competition.

Secretary Wilson underscored the importance of integrating new technology into battle management. She pointed towards the pending implementation of Advanced Battle Management, which requires the Air Force to build systems that would survive in contested domains by fusing data from multiple different points through air, space, and manned and unmanned air platforms, thereby deepening the interoperability of our forces. “This allows us to see in front of the Army on day one of a contested fight, so that we can protect them in the way the Army expects us to do”, Secretary Wilson said. She went on to stress the steps that the Department of Defense is taking to improve US alliances, noting the Air Force’s long history conducting training missions with partner militaries, pointing to both the Afghan and Singaporean Air Force training bases as examples.

The Secretary continued, highlighting three specific initiatives supporting the National Defense Strategy. The first was on the Air Force’s progress developing light attack aircraft, an experiment working alongside allies to develop lower-cost platforms to conduct violent extremism missions more efficiently. According to the Secretary, this is a system that is affordable, exportable, and interoperable with our partners and allies, an experiment that is coalition at its core.

The emphasis on alliances was furthered in her second initiative, the expansion of the State Partnership Program, which establishes military relationships between individual state National Guards and other countries. She outlined previous successes of the program, maintaining that it, “builds the kind of trust and confidence, and eventually alliances, which stand the test of time.”

Lastly, Secretary Wilson highlighted the importance of maintaining US capabilities in space. While the United States may be the current leader in this domain, she explained, our adversaries are developing capabilities to deny the use of space in a crisis or war. She argued that the United States, therefore, must develop greater capability to defend assets in orbit and to operate through any crisis. Building on years of airspace cooperation, Secretary Wilson told audience members that the US Air Force is opening and expanding its offerings of space training courses to US allies and partners.

In the conversation following her remarks, Secretary Wilson discussed the US’s transition to focus on great power competition with China and Russia, the Air Force’s efforts supporting the European Deterrence Initiative, the progress of the US Air Force’s relationship with the Afghan Air Force, civilian causalities in counter-terrorism efforts, and concerns on an overreliance on GPS capabilities and related assets in space. Secretary Wilson outlined advancements made in improving space operations, including cancelling slow target satellites, implementing accelerated missile warning systems, and moving to the next generation of jam-resistant GPS satellites to account for the challenges of different satellite constellations. The event concluded with questions from the audience.

For the past twenty-six years, the US Air Force has operated at a state of constant combat readiness. Constrained by this pressure, the force struggles to innovate, equip, and prepare for a future of warfare dominated by high-end combat. To prepare the US Air Force to fight, and win, the battles of the future, Secretary Heather Wilson has outlined five priorities:

The world is entering a period that will be defined by significant shifts—in influence, commerce, and demographics. In order to navigate these shifts, the United States should remember that it is at its strongest when working in concert with its allies and partners. Alone, the Air Force struggles with the expectations of doing too much, for too long, with too few resources. By strengthening our relationships with our allies, the world’s preeminent force in air, space, and cyberspace can continue to aim high.