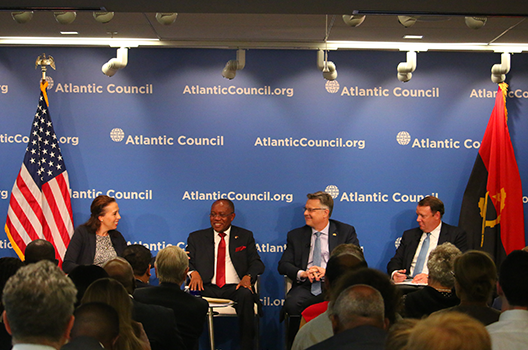 Atlantic Council Vice President and Africa Center Director Dr. J. Peter Pham opened the event by welcoming the Minister back to the Council for his second visit since 2017. US-Angola Chamber of Commerce President and CEO Ms. Maria da Cruz then introduced the Minister.

In his remarks, Augusto outlined Angola’s reform agenda under the leadership of President João Lourenço. He emphasized that increasing investment from US entities is a priority of the new National Development Plan (2018-2022), along with expanding domestic production capacities and diversifying the economy. Augusto also underscored his desire to strengthen Angola’s existing strategic partnership agreement with the United States across all fields, with emphasis on the commercial relationship between the two countries. He called attention to efforts undertaken by the Lourenço Administration to increase transparency, develop infrastructure, and enact new legislation to quell investor concerns, encouraging audience members to look to the future of Angola with optimism.

Following the Minister’s remarks, Africa Center Senior Fellow Ms. Aubrey Hruby moderated a discussion with Augusto, US Department of State Deputy Assistant Secretary Amb. Matthew T. Harrington, and GE Executive Director of Global Government Affairs and Policy Mr. Del Renigar. Renigar discussed Angola’s reforms through a private sector lens, highlighting recent improvements in visa processing, banking, and the forex market. Harrington spoke on the US-Angola Strategic Dialogue and welcomed Angola’s leadership role in addressing regional security matters such as the recent border dispute between Rwanda and Uganda, which is expected to be resolved with the signing of an accord this Wednesday in Luanda. Augusto used the conversation to underscore that Angola is no longer a country of conflict but rather a land of opportunity, with upside for small and medium-sized enterprises in addition to larger corporations.

An interactive question and answer period followed, during which the audience engaged panelists on a variety of issues, including drought management, regional economic disparities, education policy, and the ease of doing business in Angola.