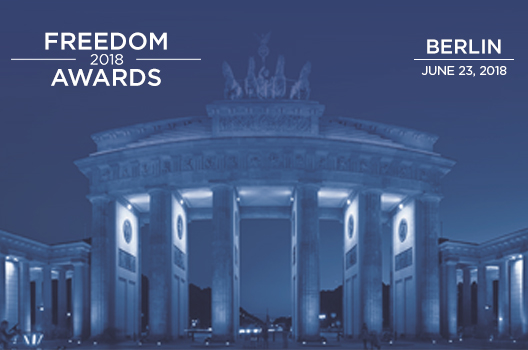 The Atlantic Council Freedom Awards recognize extraordinary individuals and organizations that defend and advance the cause of freedom around the world. Inaugurated in Berlin on the 20th anniversary of the fall of the Berlin wall, the 2009 Freedom Awards recognized the efforts of the American, German, Polish, Czech, and Slovak people, as well as the allied troops of NATO, to bring about a peaceful end to the Cold War.

From 2010 to 2017, Wrocław, Poland served as the European home of the Freedom Awards in recognition of Poland’s unique role in spreading the message of solidarity and freedom across Central and Eastern Europe.

Each year the awards celebrate past triumphs of freedom, but also those who continue the struggle today. In 2018, the Atlantic Council is excited to announce that it will bring the Freedom Awards ceremony and gala dinner back to Berlin, the city at the heart of Europe that continues to shape and define the notions of freedom, democracy, and human rights for a new generation of informed citizens and leaders.

The 2018 Freedom Awards will be hosted alongside the Atlantic Council’s 360/OS Open Source Summit, which will bring together journalists, activists, innovators, and policymakers from around the world for interactive sessions and hands-on trainings to explore one of the new frontiers of freedom, the digital space. Over two days, participants will harness the power of open source, social media, and digital forensic research to identify, expose, and explain disinformation in a rapidly-evolving information environment.