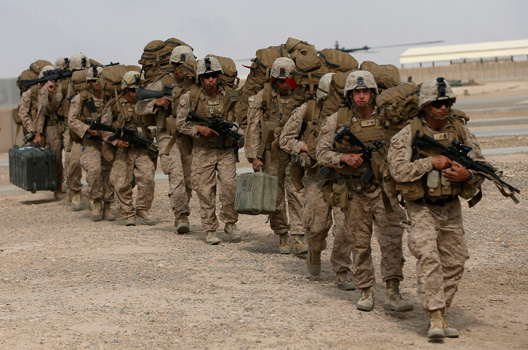 One of the biggest fallacies in Washington is that once the United States is done with private security contractors in Afghanistan and elsewhere they will simply pack their bags and head home, says Sean McFate.

In fact, these private armies go in search of new clients and conflicts.

As US and coalition troops withdraw from Afghanistan they are leaving behind a security vacuum that is being filled by private security contractors — an industry that has flourished since the Iraq war in 2003.

Some contractors may go to Iraq, while others are protecting international shipping in the pirate-infested waters off Africa.

“If the United States wants to be a global power with global presence all the time and be able to project power, but Americans themselves do not want to have to go to war, then it seems that contracting is not going to go away,” says McFate, a former US Army paratrooper in the 82nd Airborne Division who later worked with the private security firm DynCorp International.

McFate provides an insider’s take on the secretive world of private security contractors in his new book, “The Modern Mercenary: Private Armies and What They Mean for World Order.”

In his role as a private security contractor, McFate spent several years in Africa where he helped build Liberia’s army from the ground up after the country emerged from 14 years of civil war. He was also part of a mission to foil a suspected plot to assassinate the president of Burundi in 2004.

McFate, a Nonresident Senior Fellow in the Atlantic Council’s Africa Center, sat down for an interview with New Atlanticist. Excerpts below:

Q: In your book you refer to an incident in 2004 when the US government sought the help of private security contractors to foil a plot to assassinate the president of Burundi. Can you tell us about this mission?

McFate: The US government had credible intelligence that an extremist Hutu group that was hiding in eastern Congo was going to assassinate the president of Burundi in 2004, 10 years after the genocide in Rwanda and Burundi.

The idea was if they could assassinate the president of Burundi that would trigger a genocide. There has been a lot of precedent for that. [The US government] called in the CIA to foil this plot and the CIA refused to do it. The Department of Defense was called in and they refused to do it. And then they called DynCorp International and DynCorp International said ‘We’ll do it.’ In this industry you never say no.

We were able to protect the president. Without going into the details of the mission, I can say it was a success. In some ways you could say we helped prevent a potential genocide.

Q: Given the secrecy that shrouds this industry, why did you decide to write this book?

McFate: There is a lot of leftwing, rightwing kneejerk reactions about this very controversial industry. Being on the inside, I wanted to write a book that would pack some salience and some oxygen around an issue that is very misunderstood and literally explosive.

There are many pros and cons to this industry. One of the pros and cons is that they offer the White House and others plausible deniability.

McFate: Mercenaries have always been a part of warfare. In fact, the last 300-400 years when they have been largely outlawed is an anomaly in history. The norm is using private military violence. In the high Middle Ages, mercenaries were how you fought war in Europe. It’s not surprising that they have come back into international relations again. The argument of my book is that it’s rare in history when they are not a part of warfare.

The reason they have proliferated is that they are cost-effective. After the Cold War ended there was a security vacuum around the world and you saw companies like Executive Outcomes in South Africa, which was a true corporate mercenary machine.

What really broke it was the Iraq war in 2003. The past decade of war has matured this industry. The reason why was this: we all complain that we don’t like contractors, but the US administration, whether it is Republican or Democrat, had three choices in Iraq and Afghanistan — 1) we don’t have the troop strength to sustain a 10-year war there so we withdraw early, that was believed to be politically unviable; 2) we could have a national draft like Vietnam, which would be political suicide; or 3) we could have contractors. They chose contractors.

In World War II contractors made up 10 percent of the US military in war zones. In the Iraq war, the ratio of military to contractors was 50 percent. In Afghanistan it was much higher. If the United States wants to be a global power with global presence all the time and be able to project power, but Americans themselves do not want to have to go to war, then it seems that contracting is not going to go away.

Q: Does the drawdown of US troops in Afghanistan create opportunities for private security contractors to fill the security vacuum?

McFate: One of the greatest fallacies in Washington is that once the US is done with contractors, contractors are going to go away. In fact what they are going to do is they are going to seek new clients. So they will go to conflict markets like Afghanistan. Once US troops leave there will be a security vacuum. A lot of the NGOs and others that work there are going to need security. That is probably not going to come from the Afghan police force. So it will be literally boom time for contractors.

Post-Iraq they went to Afghanistan. Post-Afghanistan where will they go? They’re coming back to Iraq because of ISIS. One of the pillars of the US strategy there is to retrain and re-equip the Iraq army. That’s a contractor job. They are also going to place like Africa. We’re also seeing them do counter-piracy in the Gulf of Guinea and Gulf of Aden.

One question is will the UN Department of Peacekeeping Operations use them? There is a strong argument against it going back to Kofi Annan. During the Rwanda genocide in 1994, Executive Outcomes came to Kofi Annan, who was then the head of DPKO, and said, ‘For $120 million we can put forces on the ground to create islands of humanity and we will sustain that arrest the genocide long enough for you to generate a peacekeeping force.’ Kofi Annan said the world is not ready for privatized peacekeeping. The problem is the world was not ready for 800,000 people to be killed either. It is an expensive ideology.

As the demand for peacekeepers increases and the donor countries’ militaries are stretched and exhausted, is there a way to regulate and use private security contractors to augment peacekeeping forces?

Q: Private security contractors remain in business only so long as there is conflict. What incentive do such groups then have in ending conflict?

McFate: What makes the private military role problematic is when you link profit to killing. What’s particularly morally repugnant about this is that as profit-minded organizations they are incentivized to elongate and expand conflict. They don’t want to work themselves out of a job unless they have another gig to go to.

The bottom line is if there is no regulation, no market incentivization, you will have a free-market for force. You will have a lot of mercenaries and they will create more war. Mercenaries become bandits, and naval mercenaries — privateers — become pirates.

Q: How much damage did Blackwater’s experience in Iraq do to the industry?

McFate: It did stigmatize the industry, but didn’t really stop it. I don’t think that the four Blackwater convictions in October will have a chilling effect on the industry. Nisour Square is a systemic problem and four convictions do not fix that.

Armed contractors have an outsized impact. One of the challenges is this: we all remember Nisour Square, but who remembers Haditha? A squad of Marines killed not 17, but 23 Iraqi civilians and it wasn’t even a fog of war situation as it was in Nisour Square. These were revenge killings. It was a pure killing spree. It was swept under the rug. Are we setting a double standard here where it’s OK for Marines to commit gross human rights violations, but not for contractors to do that?

Q: What are key steps in shaping a well-regulated private security contractor market?

McFate: I am not a fan of regulation’s ability to control this industry. If you created a strong regulatory regime all you’d do is force the companies offshore beyond the reach of regulation. There is a voluntary code of conduct out of Switzerland that companies sign up to, but it has no teeth, hence it’s not really regulation.

A better way to influence industry behavior is through market power: You incentive companies to do desirable behavior. In order to do that you need a monopsony — a market with one primary buyer. The US had this opportunity in the last 10 years. The US was the consumer in chief of private security forces. It was in a position to dictate best practices and hold firms accountable, but it didn’t do that. The only other entity that can do that now is the United Nations.

Image: US Marines prepare to leave at the end of operations for the Marines and British combat troops in Helmand, Afghanistan, on October 27, 2014. The last US and British forces were airlifted from a key base in southern Afghanistan a day after the international coalition closed the massive facility and handed it over to the Afghan military. Private security contractors will fill the security vacuum left behind by departing US troops, says Sean McFate, a Nonresident Senior Fellow in the Atlantic Council’s Africa Center. McFate is the author of “The Modern Mercenary: Private Armies and What They Mean for World Order.” (REUTERS/Omar Sobhani)