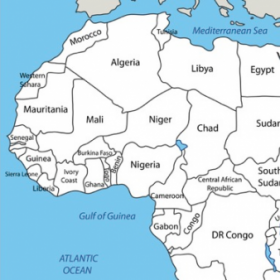 
Recent Context
On October 24, 2013, maritime piracy was again in worldwide news with the hostage taking of two American crewmembers of a US-flagged oil platform support vessel in the Gulf of Guinea, off the coast of Nigeria. According to data from the International Maritime Bureau (IMB), incidents of piracy have decreased globally in the first half of 2013, relative to the previous year, but there has been a recent uptick in piracy in West African waterways. Though, there is no indication regional piracy will devolve into a strategic game changer, it is significant that oil passing through the West African littoral and destined for US and European consumption equals 30 and 40 percent, respectively.

Among the more common but less reported piracy acts is the theft of crude oil. In this scenario, fast boats of heavily armed attackers stop the vessel, quickly board, hold the crew at bay and then offload a portion of oil and later sell it on the black market. Holding ship and crew for ransom, although statistically less common, is a source of high revenue per incident.

Making the matter all the more challenging for maritime and commercial stake owners, most countries of the Gulf of Guinea basin have strict laws prohibiting armed crewmembers. In early 2013, for example, Nigerian authorities arrested 15 Russian seamen for weapons possession. Moreover, a number of the 11 countries of the Gulf have prohibited foreign navies from pursuing fleeing attackers inside their territorial waters.

Background
With most attention and resources in recent years off the coasts of Africa focused on Somali pirates, it is often forgotten that piracy (using the IMB’s broader definition of “the act of boarding any vessel with an intent to commit theft or any other crime, and with an intent or capacity to use force in furtherance of that act,” rather than the stricter United Nations Convention on the Law of the Sea definition which limits it to the high seas) in the Niger Delta, Gulf of Guinea, and West Africa waters pose a statistically more significant threat to both the states in the region and to the broader international community.

Piracy is, of course, not new to West Africa. There were more recorded cases of pirate attacks in the waters off Nigeria than those off Somalia over most previous years. Owners of large commercial shipping companies have assessed, in recent years, the number of incidents may be doubled over than officially reported. In 2008, and still apt today, the Secretary-General of the United Nations’ International Maritime Organization, Peter Swift, characterized the dilemma or maritime piracy in West Africa as “concern [for the industry] by the ongoing violent attacks against innocent merchant ships by armed pirates operating out of a network of more than 3,000 creeks in Nigeria alone, and also by the apparent inability of the national and regional governments to protect shipping from these attacks by usually heavily armed [pirates].”

Though there is consideration of some ”political” nature to the attacks, most evidence indicates criminal motives and organizations are behind the assaults. While most analyses of these maritime predations have focused on the costs to the global economy as a whole, in terms of upward pressures on shipping costs — including longer routes taken, delays in ports, higher insurance rates, and costs which are passed on to consumers —less attention has been paid to their effect on the very countries in the region whose weakness gave rise to the piracy in the first place. In fact, reports of Gulf of Guinea piracy trickling to media largely ignore the fact that the majority of attacks are carried out against local vessels and mariners, to say nothing of the overwhelming cost burden from these assaults born by the people of the sub-region. In Nigeria, for example, piracy and other types of outlaw behavior have not only negatively impacted the oil industry, they have affected local fisheries and regional trade. Fishing constituted one of Nigeria’s most significant non-hydrocarbon exports, yet piracy and other types of violence have devastated the sector. The assaults ranged from demands for ”protection” money from fishermen, to the theft of catches, and even to the wholesale theft of fishing boats and killing of their crews.

Effective action to combat piracy in West Africa is hampered by a lack of information about the true extent of the problem. For example, when fishing boats are attacked at dockside or close to shore, such incidents do not meet the international legal definition of ”piracy,” and are thus not reported as such. Mechanisms for recording and making available data on ”robberies at sea,” moreover, are less developed than those for piracy.

The ability of West African states to counter piracy is also limited by an underdeveloped appreciation of the value of their territorial seas, to say nothing of insufficient maritime domain awareness, inadequate intelligence and early warning capabilities, and the inability to sustain patrol operations with sufficient reach over any meaningful period. Even a regional power like Nigeria has naval and coast guard assets that are often so degraded that many of its vessels larger than open patrol boats experience serviceability problems.

Fortunately, both individual states and regional, sub-regional, and specialized organizations— including the African Union, the Economic Community of West African States (ECOWAS), and the Maritime Organization of West and Central Africa (MOWCA) — have demonstrated a growing understanding that maritime security, including the suppression of piracy and robberies at sea, is an imperative.

The key will be developing the political will and finding the resources necessary to act. In this respect, international partners can assist, whether through training and capacity-building exercises for maritime security forces of regional states, such as those provided by the US Navy and Coast Guard—as well as, occasionally, maritime forces from NATO countries–through the Africa Partnership Station (APS) initiative, or through other multilateral and bilateral assistance partnerships.

With increased maritime commercial traffic in the West African region, and the development of petroleum and natural gas fields off the coasts of many regional countries, coupled with ongoing instability in some of the littoral states, reports of piracy will increase. Many of these attacks are being carried out by criminal organizations with increased range for seaborne attacks, “advancing” from raids largely confined to areas close to shore in previous years. These acts of piracy and robbery not only cost the affected countries in terms of direct loss of revenues from diminished local commerce, but also indirectly through increased transportation and infrastructure costs, and by discouraging direct foreign investment.
.
Forecast