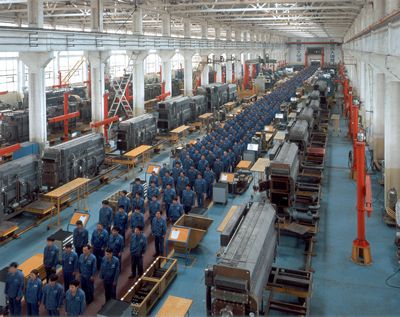 Economic growth in China is underpinned by very powerful structural factors that will remain in place for many years. These factors suggest that China will be able to sustain a high rate of growth in output and job creation during the period when the population of working age is at its peak (2005-2015), and that improved education will generate significant productivity gains when the working-age population declines and the potential for growth from sheer accumulation of labor wanes. Economic policy has generally been supportive of growth, and incremental progress is visible in many areas of concern.

While serious problems and distortions still exist, they are not sufficient to derail China’s growth momentum, and in fact their solution is likely to be financed by the high growth that may reasonably be expected in the coming years. While it is improbable that China will be able to sustain the 9.4 percent average annual real GDP growth of the past 25 years, an average growth rate of 7.5-8 percent is certainly achievable for the next decade, and possibly for another decade thereafter.

The implication of the above discussion is that there are three mechanisms for increasing consumption in China:

As noted, the sheer increase in per-capita wealth is not likely on its own to generate a substantial shift to consumption for another decade or so. In the interim, financial-sector reforms and changes in fiscal policy will have to do the trick. This author’s view is that while stock market reforms and changes in fiscal policy are theoretically capable of producing stronger consumption, it is highly unlikely that they will do so during the upcoming Eleventh Five-Year plan period (2006-2010).

Financial sector reform is likely to be quite substantial over the next five years. The domestic stock market, which has been essentially non-functional for the past four years, is now undergoing an important restructuring. Until this year, about 70 percent of the shares in domestically listed companies were a special class of shares held by state entities or other legal persons, and were not exchange-tradable. In the early years of the market (1993-2001) the shortage of tradable shares created a share-price bubble. But after 2001, when the government made clear its intent to release non-tradable shares into the market, prices plummeted. The problem for the government was thus to find a way to release its shares into the market without triggering a wholesale market collapse.

In May 2005, 46 listed firms were allowed to pilot a share reform under which all their shares were made tradable, with compensation (in cash, shares or options) given to existing shareholders to make up for declines in the share price. The pilot program was subsequently extended to all 1,300 domestically listed companies. The China Securities Regulatory Commission (CSRC) has indicated that by mid-2006, about 300 firms representing 60-70 percent of market capitalization will have completed restructuring, at which point new listings – on hold for most of the past two years – can resume. There is a huge backlog of companies waiting to list, and an enormous amount of funds available to buy shares (about $1 trillion in idle bank deposits). A substantial expansion of the stock market can be expected from 2007 onwards, and if it is handled properly it may, for the reasons outlined above, produce a boost to consumption.

Reform of the banking sector, which is almost entirely state-owned, is also underway. A number of important regulatory measures enacted in 2002-2004 should gradually force the banks to price risk more carefully and act in a more commercial manner. Virtually all significant banks now have or will soon have foreign banks as strategic shareholders, and the expectation is that these strategic partners will introduce modern management techniques and technology. Improved financial intermediation and credit procedures should also boost consumption, since Chinese consumers at present have virtually no access to credit except for home mortgages. However it is unlikely that the slow process of bank reform will produce large increases in consumer credit within the next five years. Significant progress in this regard may become evident early in the next decade.

In the short term, the most plausible source of consumption stimulus is from the government. As noted, government consumption expenditures are relatively low, and this stance depresses private consumption as well, because it increases the need for precautionary saving. The IMF and World Bank have both argued that China has fiscal room to increase expenditure on services such as health and education, and that it ought to do so. The government of Hu Jintao and Wen Jiabao has paid considerable lip service to the idea of a more socially responsive government, but has so far proved reluctant to alter fiscal policy in any substantial way. This conservative stance is likely to persist at least through the next Communist Party plenum, in late 2007. Thereafter, a re-ordering of fiscal priorities is possible, but given the large and complex nature of the Chinese state any reforms adopted then would be unlikely to have widespread macro-economic impact until 2010 or so.

In sum, the inertia of the current investment- and export-led growth model, combined with demographic factors that favor continued high rates of investment in labor-intensive industry and urban infrastructure, suggest that the structure of Chinese economic growth will remain more or less the same over the next five years. Beginning in 2010, a combination of financial sector and (perhaps) fiscal reforms will enable consumption to play a larger role, and beginning in or around 2015 consumption will be further boosted by China’s attaining a level of wealth that in other countries has proved to be the take-off point for consumer spending.