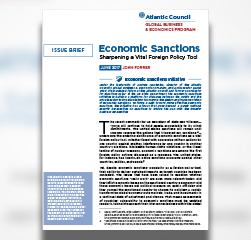 Despite the popularity of economic sanctions as a foreign policy tool, their ability to deliver sustained impacts on target countries is often called into question. In “Economic Sanctions–A Vital Foreign Policy Tool,” author John Forrer, associate research professor of strategic management and public policy at the School of Business at George Washington University, explains the reasons behind sanctions’ enduring popularity. The author argues the most compelling reason for their appeal is that they can be designed and deployed to achieve many foreign policy goals.

According to Forrer, the most typical uses of economic sanctions to achieve foreign policy goals include:

Yet, Forrer cautions that the issues, which have been raised to question whether economic sanctions “really work,” are even more relevant today. The author lists the following questions as important measuring sticks for sanctions’ effectiveness: Did the sanctions inflict economic losses on the sanctioned country’s economy? Did those economic losses put political pressure on public officials? Did they compel the sanctioned country to change its policies? Forrer adds that a rapidly transforming global economy puts markets, trade, and investments in a continual state of adjustment and change. He concludes that for sanctions to be effective, the design, implementation, and measurement of economic sanctions’ impacts must be properly calibrated to the economic realities of the moment, not the past.

This issue brief is part of the Atlantic Council’s Economic Sanctions Initiative and is made possible by generous support through Hogan Lovells US LLP, PricewaterhouseCoopers US LLP, and David Aufhauser.