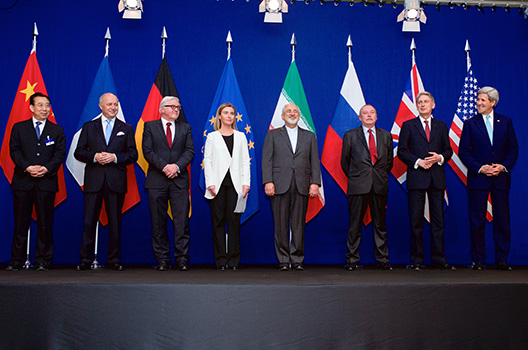 Concerns in the United States and its traditional Middle Eastern allies about Iran’s expanding regional role in the aftermath of the Joint Comprehensive Plan of Action (JCPOA), reached between Iran and the P5+1 on July 14, 2015, fail to take into consideration a significant debate within the Iranian policy elite. In “Iran Debates Its Regional Role,” University of Tehran Professor Nasser Hadian dispels commonly held myths about Iran and its regional goals, and presents a native perspective of Iran’s threat calculations and the resulting spectrum of policy perspectives.

Generally speaking, Iranian threat perceptions can be divided into two categories: threats to its revolution¬ary ideology and values, and threats to its traditionally defined national interests and security. In the discourse of post-1979 Iran, the two have often been conflated. Responses to the threats Iran faces can be broadly orga¬nized into two camps: “pro-stabilization” and “pro-min¬imal engagement.” Hadian explores these varying orientations to inform US policymakers and other stakeholders watching Iran in a post-deal environment.