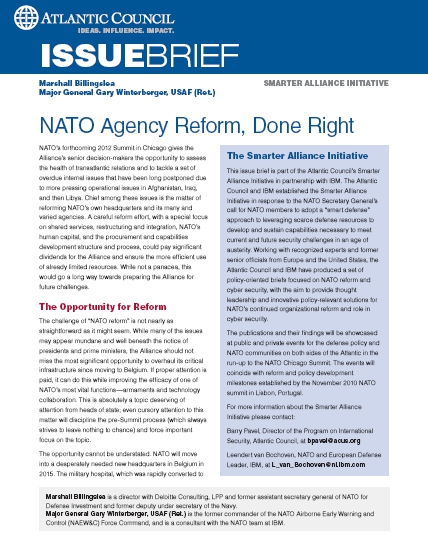 The publication was released during the event “Transforming Towards a Smarter Alliance: NATO Reform in the Age of Austerity,” part of the Council’s Smarter Alliance Initiative in partnership with IBM.

NATO’s forthcoming 2012 Summit in Chicago gives the Alliance’s senior decision-makers the opportunity to assess the health of transatlantic relations and to tackle a set of overdue internal issues that have been long postponed due to more pressing operational issues in Afghanistan, Iraq, and then Libya. Chief among these issues is the matter of reforming NATO’s own headquarters and its many and varied agencies. A careful reform effort, with a special focus on shared services, restructuring and integration, NATO’s human capital, and the procurement and capabilities development structure and process, could pay significant dividends for the Alliance and ensure the more efficient use of already limited resources. While not a panacea, this would go a long way towards preparing the Alliance for future challenges.

The Atlantic Council and IBM established the Smarter Alliance Initiative in response to the NATO Secretary General’s call for European allies to adopt a “smarter” approach to leveraging scarce defense resources to develop and sustain capabilities necessary to meet current and future security challenges. Working with recognized experts and former senior officials from Europe and the United States, the Atlantic Council and IBM have produced a set of policy-oriented briefs focused on NATO reform which will be officially launched during the conference.