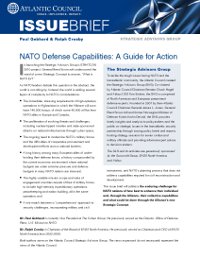 Strategic Advisors Group (SAG) members Paul Gebhard and Ralph Crosby address the enduring challenge for NATO nations of how best to enhance their individual and, through the Alliance, their collective capabilities and what could be done through the Alliance’s new Strategic Concept.

In launching the Strategic Advisors Group’s STRATCON 2010 project, General Brent Scowcroft underscored the need of a new Strategic Concept to answer, “What is NATO for?”

As NATO leaders debate this question in the abstract, the world is not sitting by. Instead, the world is adding several layers of complexity to NATO’s considerations: